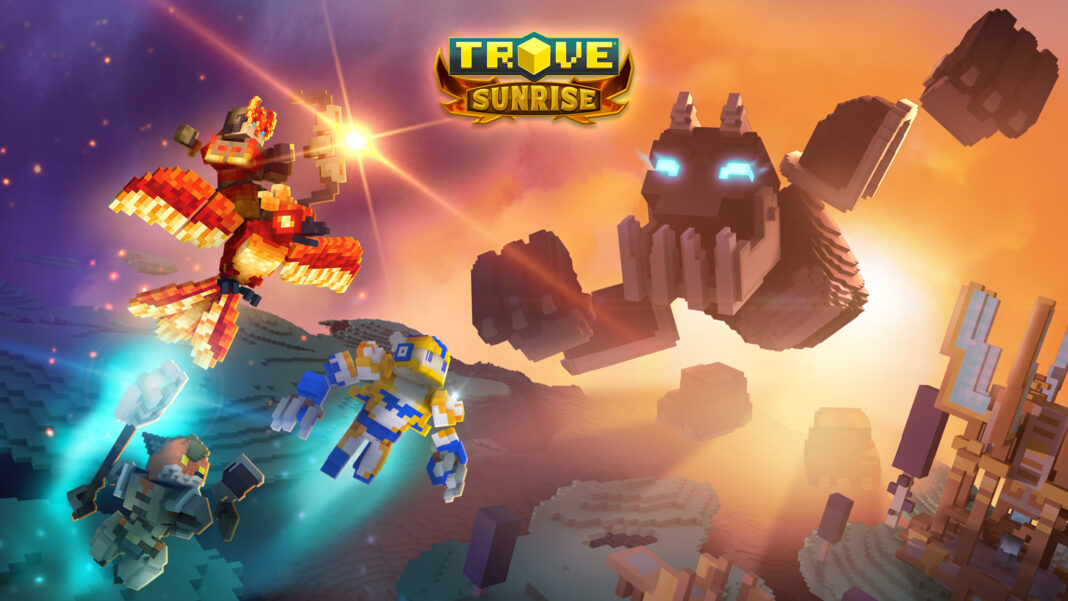 gamigo is announcing a new day will dawn in its popular voxel-based MMO, Trove: Starting one June 28, 2022, Trovians playing on PC can begin exploring the “Sunrise” update, which includes the new Solarion class, the new Sundered Uplands biome, Ultimate Bosses in new 5 Star Dungeons, and much more!

The new Solarion class works as a servant of the Sun Goddess to smite enemies through a combination of their bow for long-range attacks and a pet phoenix that rushes in with fast and fierce melee attacks. This fired-up class uses their Phoenix Radiance passive ability to increase their attack rate and gain energy to summon a pet phoenix to aid in battle. When the phoenix is slain, a self-healing egg will spawn and explode once its max health is reached. And from the egg’s ashes, the Solarion’s phoenix will rise again to aid their master once more!

Additional abilities for the Solarion include Solar Flare – a charged explosive shot that damages enemies over time – and Guiding Light – summoned pillars that damage enemies and heals friendly targets within their area. Their Ultimate Prismatic Blast deals damage to enemies surrounding the Solarion while stacking damage buffs up to 5 times. Once their energy is depleted, their Ultimate will stop.

Now that we’re well acquainted with the Solarion, it’s time to introduce players to Trove’s newest biome, Sundered Uplands. Trovians that reach Uber-1 Adventure Worlds can explore this biome’s unique upper and lower levels, but it’ll primarily be found in Uber-7 Adventure Worlds and will certainly give them more of a challenge than neighboring biomes. Be mindful that both levels aren’t created equal as the Irradiant Sky Giants build and expand land stolen from down below. This tips the balance of power in their favor, resulting in a biome filled with many challenges:

With so many dangers ahead, Trovians will not be fighting with their backs against the wall as they can head to Fungal Outposts to gain access to Personal Chests, Flask Refillers, Loot Collectors, Fungi Adventures, and a variety of merchants. The new Crystal Gems can also be used to improve a Trovians’ gear to help them fight off the numerous monsters lurking in the Sundered Uplands.