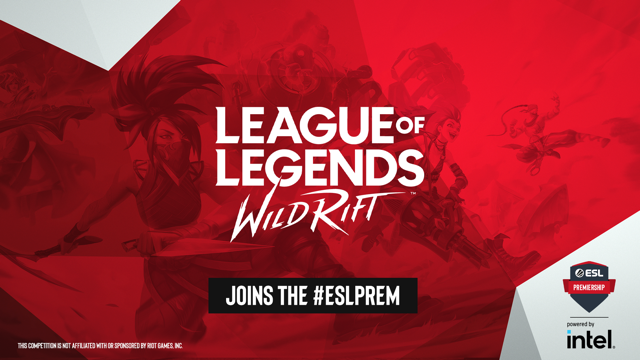 ESL Premiership announces the introduction of its first ever mobile title, League of Legends: Wild Rift

London, UK – March 17, 2021 – ESL Premiership, The UK and Ireland’s longest standing competitive series will operate a one-off League of Legends: Wild Rift tournament, the ESL Wild Rift Premiership. For the first time, teams from Nordic Regions will also be competing in the ESL Premiership alongside UK and Ireland participants. This event is marked as one of the region’s first Wild Rift competitions.

Featuring a £5,000 prize pool, the tournament will include open qualifiers, an eight-team round robin group stage and playoffs. This will all culminate in an online, remote play finals held on Saturday 19th and Sunday 20th June. “It’s a historic moment to bring a mobile title to the ESL Premiership. Wild Rift is the perfect game to deliver this never seen before experience to the UK, Ireland and Nordics.” says Dan Ellis, Partnerships Director, ESL UK.

You can sign up now for the Open Qualifiers by visiting ​esl.im/WildRiftQual1 and esl.im/WildRiftQual2​, which will start at ​12:00 GMT on Saturday 3rd April and Sunday 4th April respectively. Broadcast coverage starts on Tuesday 20th April, don’t miss a moment by tuning into ​ESL_LOL​.