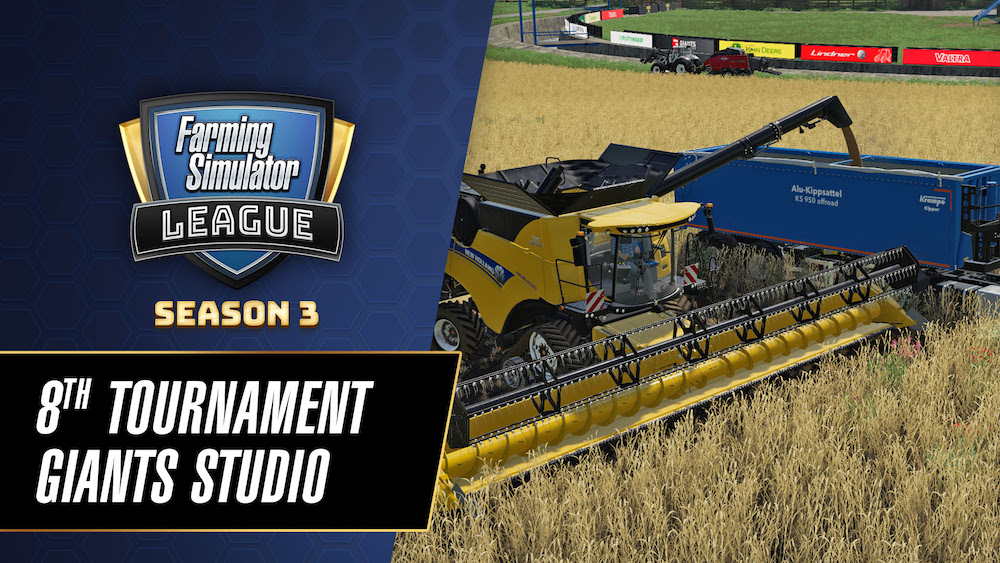 GIANTS Software, developer and publisher of the worldwide popular Farming Simulator series, announces in- person events for the current Farming Simulator League (FSL) esports season. So far, tournaments in the third season have been held as online events. All participants can now look forward to real events in Bavaria, Germany, subject to compliance with the relevant hygiene concepts.

The qualified teams will play the final round of the eighth tournament on 14th and 15th August in the GIANTS Studio of the German GIANTS Software branch in Erlangen. There, the best FSL teams will meet each other in real life for the first time in the current season and fight face to face in groups of three for ranking points and tournament prizes. A highlight video of the last tournament played provides an atmospheric preview.

From 11th to 12th September, the next knockout tournament will take place in Buchloe at the Allgäu family business Rudolf Hörmann GmbH & Co. KG. The specialist for agricultural and commercial construction offers enough space and comfort for an exciting competition and event atmosphere in its modern and spacious production hall. HÖRMANN itself provides an FSL team consisting of factory employees, which currently occupies fourth place in the overall season standings.

Live broadcasts of the Sunday events

The final round of the last eight teams remaining in the tournament will be commented on and broadcast live from 10 am on Sundays, 15th August and 12th September on the official GIANTS Software channels on Twitch and YouTube. GIANTS Software is also planning real events for the two other remaining events in the season calendar. Further information will be announced shortly.

Developer and publisher GIANTS Software is organising the FSL, which has a total prize pool of 250,000 Euros, as the competitive esports mode for Farming Simulator. Via the free Tournament Client for Season 3, every interested fan of the Farming Simulator can register for the FSL and prove themselves in the qualifying rounds with the potential of competing against one of the seeded sponsored teams. In the tournaments, which are held as knockout events, the teams collect league points, which are used to qualify for the big season finale in November 2021.

The competition requires teamwork and skill on a separate map in the PC version in order to harvest grain together, produce bales and then deliver them to your own barn faster than the competing team.