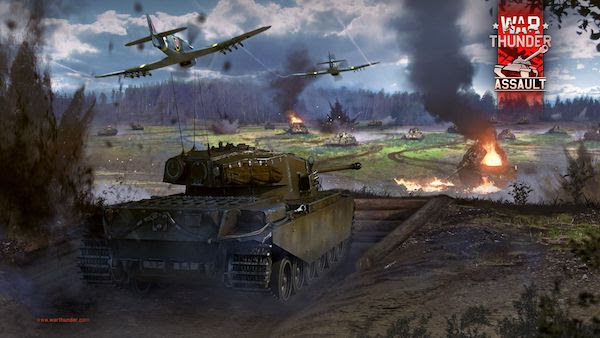 New Co-Op game mode ‘Assault’: Coming soon, available in two iterations, the new game mode challenges players to defend a strategic location against waves of enemy ground vehicles or aircraft. For tankers, combat is fought tank to tank on the ground, with the ability to temporarily support teammates in attack aircraft or bombers. Pilots are tasked with maintaining air superiority over a zone by fending off enemy bombers approaching from all directions. As each successive wave is stronger than the previous one, players have to work together to hold out until the end, upon which they will receive well-deserved rewards.

Three New Map Locations – More Than 80 Maps in Total! The ‘Assault’ update includes three new battle locations including one map for air and two maps for combined arms battles. On ‘Guiana Highlands’ fighting begins at an altitude 6000 meters above sea level, with the whole area being divided into several ‘floors’ that each feature their own battle and victory conditions.

The two combined arms battles, ‘Ardennes’ and ‘Phang Nga’, are set during the early stages of the Battle of the Bulge and the Pacific War, respectively. The former puts players into the outskirts of the Belgian town of Bastogne as they fight for control over the town and the frost covered hilltops surrounding it. The latter, which will be made available in one of the upcoming Naval Pre-Beta weekends, sees players contest the coast of Thailand in a battle waged from air and sea.