Versatile Champion of the Wilds

The Warden class is an adaptable, support-orientated option for players who want to be able to fill a specific role while simultaneously providing assistance to others. If you are interested in a class that uses the wilds of Tamriel to protect, heal, or deal damage (occasionally all at the same time) the Warden is for you.

“The nature-based class was a core player fantasy that we hadn’t fulfilled with the four classes that currently exist,” says the Warden’s Lead Designer Eric Wrobel. “So we wanted to give people the ability to express themselves that way.”

Like nature itself, the Warden is an irresistible, chaotic force in battle, able to summon fierce animals, sprout healing plants from the ground, or cloak themselves and others in protective ice.

The inspiration for the character’s design in part comes from traditional nature-based archetypes and in part from the Elder Scrolls’ Spinners – the Wood Elf priests of Y’ffre who use storytelling to preserve Bosmer culture.

“The most important thing about the Warden’s visual style is that it’s very natural and organic looking,” Wrobel says. “When we were building its abilities, we often modified them to look wild and spontaneous. We didn’t want the abilities to feel synthetic.”

This core philosophy can be found in every aspect of the Warden’s design, including abilities, effects, and animations. For example, when activating the ultimate Wild Guardian, you’ll notice your Warden summons the war bear with smooth natural motions, and when casting Healing Seed, the plants appear to sprout at random from the earth, just as they might in the natural world.

The Warden also stands unique in The Elder Scrolls Online as an ally-focused class that finds creative ways to benefit their group-mates regardless of their primary skill line or role. For example, Frost Cloak gives you and nearby allies Major Ward and Major Resolve, resulting in a serious buff to the party’s defense, and Enchanted Growth grants your allies Minor Intellect and Minor Endurance, increasing both Magicka and Stamina regeneration.

No matter what skill lines you pursue, you’ll always be an asset to your fellow adventurers with the Warden. 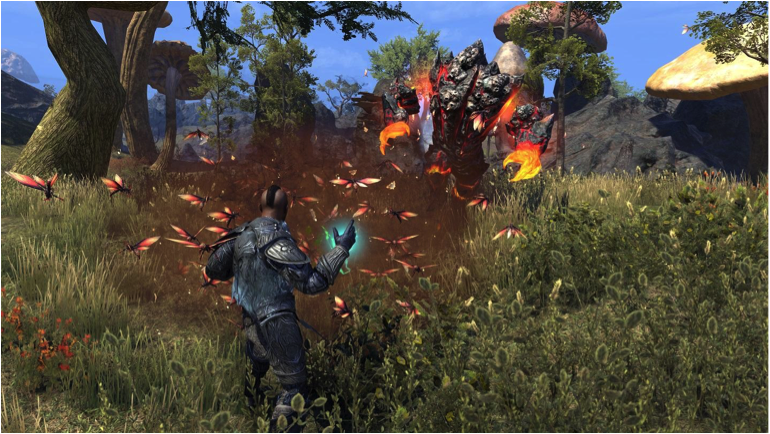 Draw Power from Nirn itself

“With the Warden’s skill lines, we wanted to communicate more clearly what each skill is about and what you’re going to get if you invest in that line,” Wrobel says. “With some of the other classes in ESO, the skill lines can do a little of this and a little that, and a lot of them need to rely on weapon abilities in order to fulfill a specific role. This is the first time we’ve made it as clear cut, which we think players will appreciate.”

The fact that the skill lines seem straightforward doesn’t mean that the Warden will be easy for you to play. In fact, the Warden’s abilities require various levels of finesse, featuring their fair share of skill shots or tricky, timed effects. For example, Scorch summons three Shalks in a straight line after a three-second delay. This allows you to pull off some big-time burst damage, but it also requires precise timing and positioning in order to execute. By comparison, Dive sends a shrieking Cliff Racer at a targeted enemy for some simple direct damage.

In some cases, the amount of skill required to effectively use an ability increases after you have morphed it. While Fungal Growth simply requires you to look at allies to heal them, after morphing it to Soothing Spores, your heal strength is increased if they are nearby, meaning you’ll need to focus on positioning and team coordination to get the most out of it.

Your Warden can be exactly as complex or as simple as you want it to be, and the new class permits a host of unique builds for various levels of play.