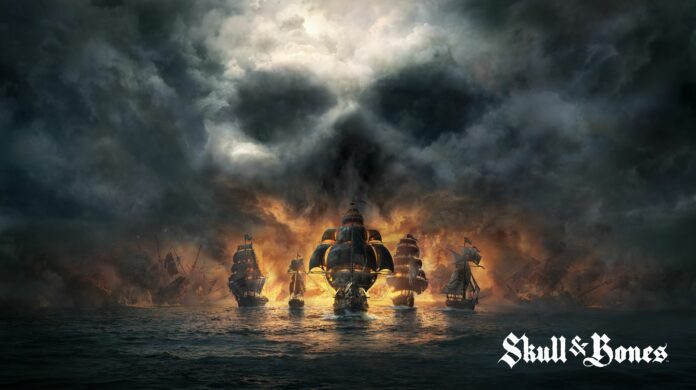 “With development led by Ubisoft Singapore, SKULL & BONES will take gamers to the Golden Age of Piracy where they will create their own unique pirate captains and sail through the beautiful yet treacherous Indian Ocean filled with rich merchant trade routes to loot. Whether it is on their own or as part of a pirate gang, gamers will take the helm of their powerful warship and lead their crew into the endless battle to rule the seas and become the deadliest pirate kingpin.

SKULL & BONES is an online naval game that will take players across a dynamic, shared open-ocean that reacts to their actions and evolves to continuously challenge them. Building upon the studio’s naval gameplay expertise, SKULL & BONES introduces an innovative wind system that gives gamers tactical opportunities to navigate more quickly, shoot further, hit harder, escape deadly blows, and position themselves to decimate their victims. Gamers will also be able to build their own fleet of ships, which can specialize in different battle conditions using the game’s extensive customization options.”

“SKULL & BONES is the game that our team has dreamed of building ever since we first set sail singing along to sea shanties and we are excited to finally share our vision here at E3. Thanks to our systemic living world, our gameplay innovations, a strong fantasy and the team’s commitment to support the game in the long term, we believe that SKULL & BONES will bring players a unique experience allowing them to live the intriguing and thrilling life of pirates.”

Q: What is SKULL & BONES?
SKULL & BONES is a brand-new IP developed by Ubisoft Singapore. It is an online naval open-world, set in the thriving times of the Golden Age of Piracy.
Players will helm their own pirate ships and prey on the richest trade routes across the most beautiful ocean ever: the treacherous waters of the Indian Ocean. We are redefining naval gameplay with SKULL & BONES by adding tactical depth and incorporating multiplayer features.
We are building a dynamic ecosystem full of opportunities, players will have to scale the food chain to become a legendary predator of the sea, as they take down vicious predatory factions and well-defended convoys. They will have a choice to engage in combat solo or choose to ally and betray other pirate captains. With each successful heist, a player’s wealth and reputation increases and the world and other players react to challenge the ascension.

Q: What is the main difference between SKULL & BONES and Assassin’s Creed IV: Black Flag?
SKULL & BONES is an online naval open-world with long-term multiplayer features built around a dynamic ecosystem that reacts to player’s actions, offering them the opportunity to engage in combat solo, team up with other players and/or confront rival players in various modes of competitive team based PvP arenas.
The gameplay offers rich and deep tactical-action, where players need to master the winds in order to prey on their enemies well. Additionally, the game has a great RPG-like progression and extensive levels of ship customization. Designed as a long-term multiplayer experience, we are committed to support SKULL & BONES long after its release, and continuously build a community of players around it. Additionally, there is a strong social aspect behind the game. Early on, players will be given a possibility to set up guilds and form gangs of pirates in order to challenge bigger enemies and convoys as they expand across the treacherous waters of the Indian Ocean, an exotic and untamed frontier full of lavish riches

Q: Who are the playable characters in SKULL & BONES?
In SKULL & BONES, players can choose their pirate captains to reflect the pirate they have always wanted to be.
Each character enters the world as an insatiable, upstart pirate captain with nothing to lose. After refusing the King’s pardon that ended piracy in the Caribbean, each captain decides to set sail to the Indian Ocean and forge a new destiny.

Q: Are there different factions?
As a pirate of the Golden Age of Piracy, players will face navies from the colonial Europe that are based in the Indian Ocean. Players will also encounter the world’s first truly private, militarized trade corporation: the ruthless VoC (Verenigde Oostindische Compagnie in modern spelling, referred to by the British as the Dutch East India Company) that will do anything in the name of profit for its investors. Finally, players will be able to form their own gangs and factions. Other enemies of the time will be revealed at a later date.

Q: Where does the game take place?
The game takes place along the richest trade routes of the Golden Age of Piracy found across the four corners of Indian Ocean. They carried all sorts of riches that drive the world economies including silver, ivory and most importantly, spices.
Today, at E3, we are showing a very small part of our game in the deep waters near Madagascar.

Q: How does the customization system of the ships/Captain works?
Captain: From the start of the game, you will be able to choose your own pirate captain and grow into the fierce legend that you always wanted to be. More details on this will be revealed soon.
Ship: Our game is built around distinctive ship classes with complementing strategic roles to fit a variety of RPG inspired archetypes. Today, we shared three of them. These are:
o Frigate, a defensive resilient tanker ideal to protect allies, hold objectives and control the battlefield.
o Brigantine, an attacking short-range charger, perfect to assault enemies and push objectives.
o Sloop-of-War, an assisting lethal long ranger, built to help allies and disrupt enemies.
These ship classes, each with different warships, will scale in depth and come with signature abilities and weapons. Throughout the game, players will be able to find, unlock new ship options and weapons that will be upgradable.
Similarly, the ships will have a wide range of cosmetic customizations, so players can build the ship of their dreams.

Q: How does progression work in the game?
The progression will occur in both a vertical and a horizontal aspect. In the Hunting Grounds of our PvE zones, you will have more of a vertical progression and gain levels to allow for greater challenges against NPC targets.
In the Disputed Waters of our PvP areas, we want to have a fair system in place for all levels of players. We will rely more on horizontal progression. Building your ship’s load out will be all about what suits a player’s style the best – allowing players to create synergies and strategies with other players.

Q: How many modes are there? Are there both PvP and PvE?
There will be both PvE and PvP modes within a systemic and ever changing shared open-ocean to let players decide how to socialize with other pirate players roaming the seas. Players will fight iconic pirates and rival players, whom you can choose to ally with or betray. While they will constantly interact with other pirate players, players will not be forced to engage with them if they prefer not to. At E3, we have just revealed the Disputed Waters, these are our unclaimed territories where rival pirate gangs compete for prey in 5v5 matches within PvP arenas. More details about this will be revealed at a later stage.

Q: Does SKULL & BONES include a single player campaign?
We are building a narrative system which is completely integrated in the game and will not be something aside of the multiplayer experience. You will encounter iconic characters and memorable rival pirates. More details about the single player campaign will be shared at a later date.

Q: Are there any exploration missions inland?
From the very beginning, we have set out to create a game about the most exhilarating part of piracy: the hunt that happens at helm of your ship. Thus, key focus of SKULL & BONES will be the adventures at sea. Players will be able to interact with some locations to access stores, shipyards, taverns, recruit crew members and pick up on the latest rumors to plan their next heist. More information to come on that later.

Q: You have announced that some early access to the game will take place this year. When will they take place?
We are excited to be able to put the game in the hands of the players as soon as possible and welcome them to the thrilling world of SKULL & BONES. Regarding information on our live phases, players can register online on our site www.skullandbonesgame.com for the latest updates and news.

Q: We have seen a glimpse of the Kraken. Will we battle against any fantastic creatures?
We wanted to stay true to the world as sailors of that time saw it, and many feared what lurked beneath those treacherous waters, dreading never to encounter them. We wanted our game to evoke similar emotions with SKULL & BONES players.

Q: Which studios are working on the project?
We have several studios that are working closely hand in hand: Singapore, the lead Studio, along with Chengdu in China and Blue Byte in Mainz, Germany.

Q: When will the game be released and on what platforms?
Our current release date is Fall 2018. SKULL & BONES will be available on PS4, PS4 Pro, X1, Scorpio and Windows PC.