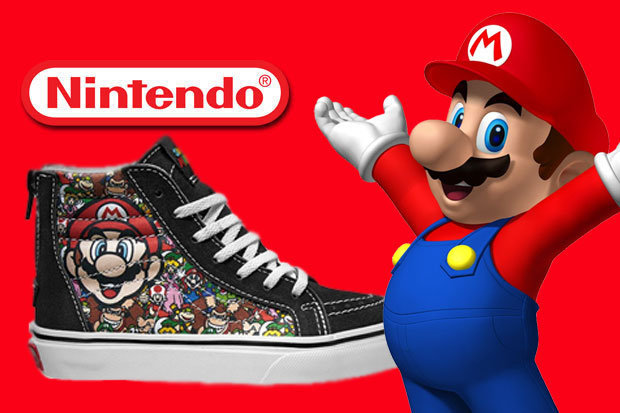 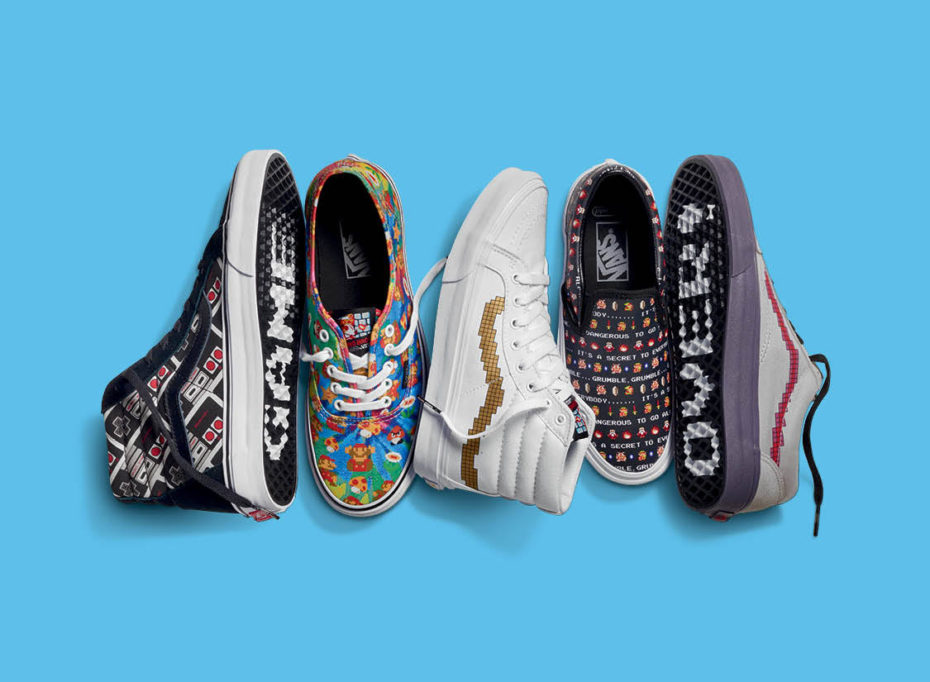 Vans Powers Up with a New Nintendo Collection! Vans and Nintendo Team Up for the Ultimate Adventure in Footwear and Apparel

Cypress, CALIF. (June 1, 2016) – Gamers, it’s time to power up as Vans and Nintendo, the ultimate two-player partnership, unveil an extensive collection of footwear, apparel and accessories celebrating the early days of video games. Vans presents exclusive graphic prints using 8-bit inspired artwork and characters from Super Mario Bros., Duck Hunt, Donkey Kong and Legend of Zelda, as well as an assortment inspired by Nintendo’s first console, the Nintendo Entertainment System (NES). Set to release June 3, this coveted collection will be available in adults and children’s sizing, making it ideal for Vans and Nintendo fans of all generations.

The Vans x Nintendo Classic footwear assortment kicks off with four variations of the Authentic silhouette. Travel to the Mushroom Kingdom for the first colorway, the Super Mario Bros. Tie-Dye, which showcases an all-over character print of Mario alongside several “power-ups” and the villainous Goomba over an 8-bit tie-dye pattern. A second color-up features the original damsel in distress, Princess Peach, awaiting rescue from her brave plumber. Duck Hunt comes to life atop a digi-camo backdrop featuring the hunting dog and flying duck and the final execution of the Authentic is an ode to Donkey Kong and incorporates imagery from its first level to present the title character in a unique floral arrangement. Vans’ iconic lace-free silhouette, the Classic Slip-On, appears in the sneaker line-up with graphics and quotes from The Legend of Zelda. A Sidestriped trio of the Sk8-Hi, Old Skool and Sk8-Hi Slim for women pay homage to the NES with prints and colors inspired by the console. Lace-up styles are trimmed with special details including Nintendo game logos on the tongue label and NES controller lace caplets. For the greatest feature, kick up your heels to reveal Vans iconic waffle sole printed with ‘Game Over!’

To present a throwback-styled, head-to-toe look, the Vans x Nintendo collaboration extends into apparel and accessory items for men and women. Co-branded tees, backpacks, bags, socks and hats are offered in prints that tie back to the Classic footwear.

Vans invites the newest generation to join in on the fun with sneaker styles sized down to youth and toddler fits. Tiny tykes can get their hands on patterns designed just for kids with characters from Mario Kart and Super Mario across the Sk8-Hi Zip, Classic Slip-on and Authentic.

The Vans x Nintendo collection is available to all gamers around the world with the collection available this Friday in the US and at international retailers throughout the month. Travel through the warp zone and visit www.vans.eu/Nintendo to shop or find a store near you.