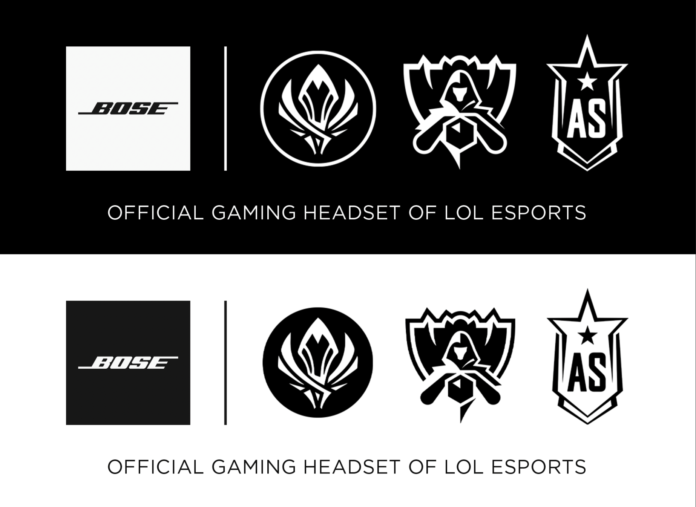 Riot Games® and Bose today announced a multi-year sponsorship to make the leading audio brand an official partner of LoL Esports™ and its global events: the World Championship™, Mid-Season Invitational™, and All-Star Event™.

The SoundComm is the first noise cancellation headset used by LoL Esports, and will ensure critical in-game sounds are clear, communications between players are heard, and the referees ability to hear and make calls are optimized – all helping Riot Games deliver the best possible sound experience to fans watching.

“Bose has been an industry leader in audio technology and innovation for decades, and we’re thrilled to partner with them to both level up the pro player experience across LoL Esports and our global events while also providing an even richer audio connection to our fans,” said Naz Aletaha, Head of Global Esports Partnerships & Business Development, Riot Games.

“Success in League of Legends is critically dependent on communication. Not only do pro players have to be able to clearly hear in-game sounds, they must be in constant communication with their teammates to coordinate plays. Bose’s expert sound engineering wholly tackles the demanding audio requirements of LoL Esports.”

As part of the sponsorship, Bose’s new QuietComfort® 35 II Gaming Headset has also been named the Official Gaming Headset of LoL Esports Global Events. The QC35 II Gaming Headset is the first noise cancelling headset for gaming applications from Bose. It provides a comfortable fit for hours of competitive gaming, a Discord and TeamSpeak-certified boom mic for clear communications, and additional features that allow for easy control of volume and mic monitoring. It’s also fully compatible with all major gaming platforms, including PC, consoles, and mobile devices. And the removable boom mic also allows the headset to be used beyond gaming applications – for home, work, and on-the-go.

“Bose is excited to enter the Esports space by supporting LoL Global Events and its competitors, while also introducing our first-ever gaming headset to the market” said Pat LaCroix, Head of Global Brand & Marketing Activation. “The relationship between Bose and Riot is a natural fit – both companies take pride in leading with technology and innovation, and putting the customer first.”

Bose and LoL Esports will also be working together to provide fans with an inside look at the team dynamics of LoL Esports during matches through “Sounds of the Game” content. A new content series developed by Bose also will take players beyond the headset to showcase why sound is such an integral part of competitive League of Legends.