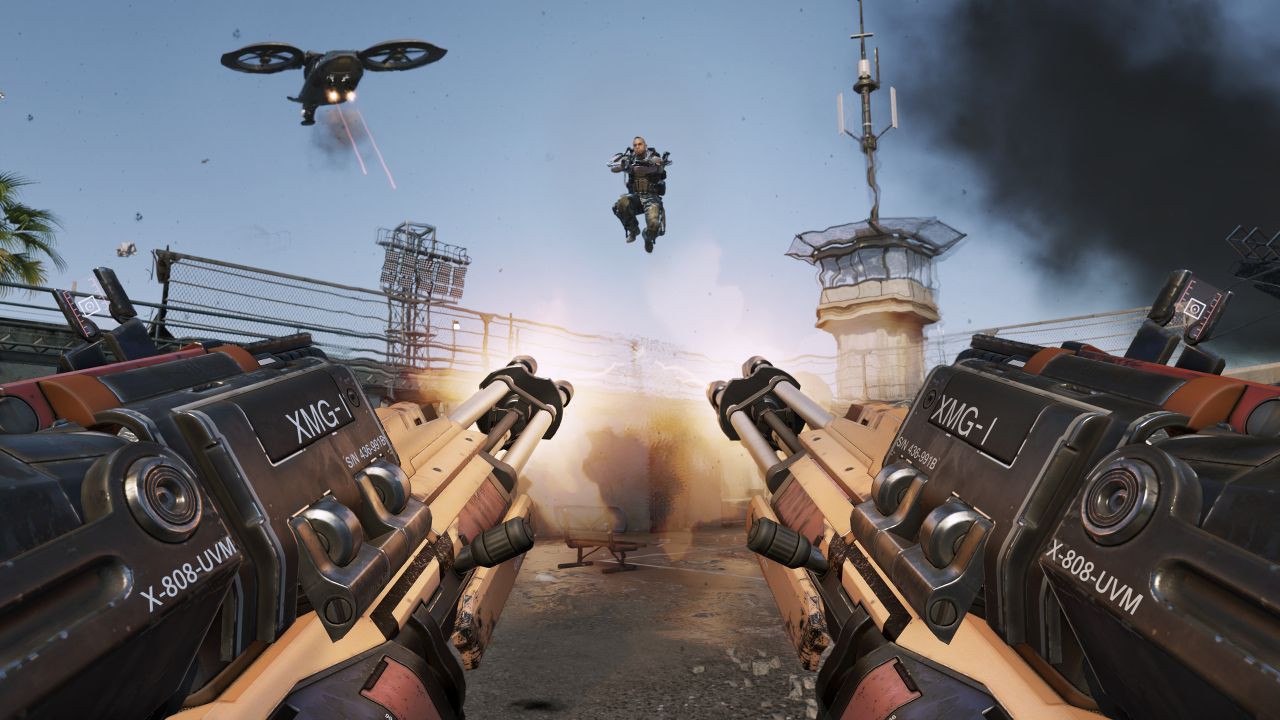 Penned by the team of storytellers at Sledgehammer Games and boasting true next generation visuals, Call of Duty: Advanced Warfare jolts players forward in a groundbreaking experience that’s ripped-from-the-headlines-of-tomorrow, envisioning a future where both technology and tactics have evolved to create a new era of combat for the franchise. Based on plausible technology and extensive research, the narrative begins in the year 2054. The Atlas Corporation, a private military corporation (PMC), has emerged with the power to rescue humanity after a global attack on its military and infrastructure. Empowering players with new, cutting-edge exoskeleton abilities and an advanced arsenal with new weaponry, vehicles and high-tech gear, players can join the ranks of a highly-trained, specialized unit committed to restoring order.

Led by Sledgehammer Games, Call of Duty: Advanced Warfare is being developed for Xbox One, PlayStation 4 and PC. The title is also in development for the Xbox 360 and PS3. Designed for next gen systems, Advanced Warfare is the first Call of Duty utilizing an expanded three-year development. With the expanded production capabilities, Sledgehammer Games is able to create a new, true next generation experience, featuring an array of technical advancements from the sights and sounds that create a world unlike any Call of Duty before, to new performance capture and facial animation technologies that deliver lifelike characters, to a rich and immersive story that brings the fiction to life. 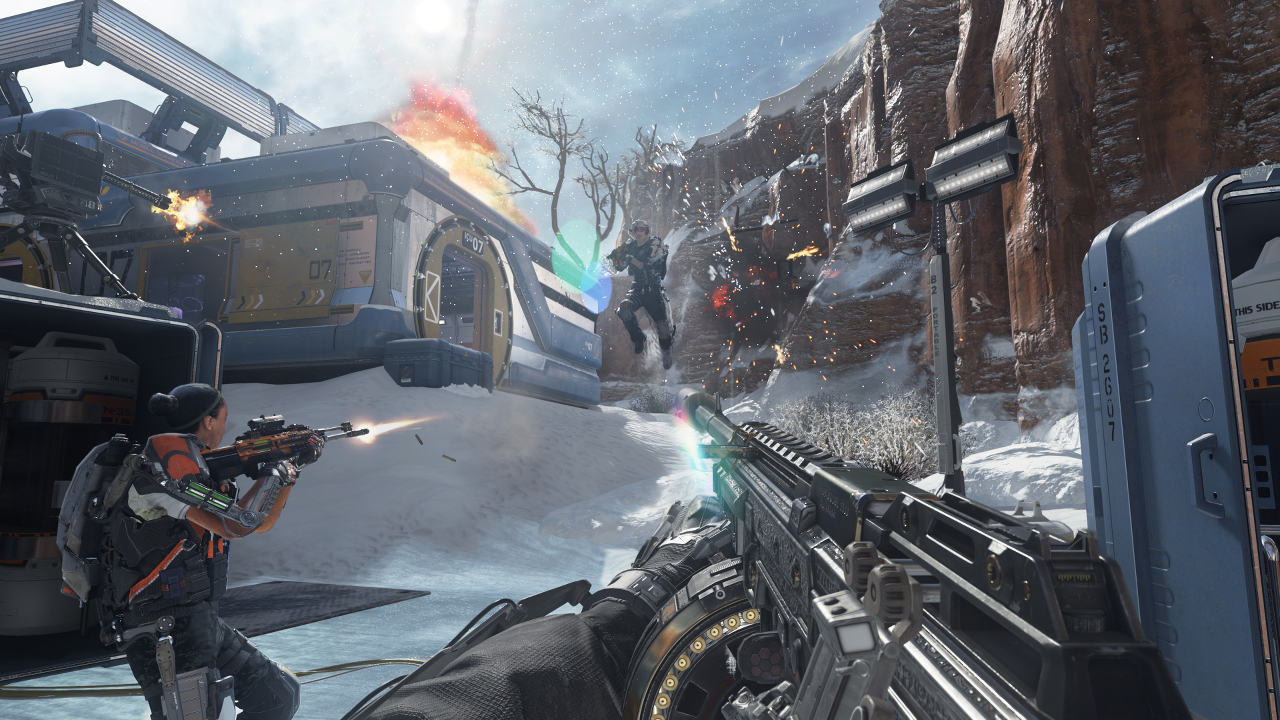 It all starts with the Call of Duty: Advanced Warfare exoskeleton and the fundamental way it changes player movement delivering a new level of tactical combat. Speed, strength, agility, and verticality transform how you play. New abilities, movements, perks, equipment and weapon classes offer fans the most personalized, customizable and reward-based Call of Duty multiplayer. It all comes together to make each player feel like a tier one soldier of the future.

ADVANCED EXOSKELETON MOVEMENT: With the addition of the exoskeleton movements, the speed of the game increases dramatically. Boost Jump makes higher sightlines easily reachable and offers a new level of vertically. Boost Dodge delivers enhanced maneuverability, while Boost Dash provides mid-air evasive maneuverability. And Boost Slam empowers a new air-to-ground melee attack. It comes to life when players combine and chain these new mechanics to move through the map and engage with the enemy unlike anything ever in Call of Duty.

The exoskeleton offers new opportunities for specific exo abilities as detailed below. With the introduction of the variable grenade, the tactical slot in the create-a-class is now open for players to choose an exoskeleton ability.

SUPPLY DROPS: In Call of Duty: Advanced Warfare customization begins with Supply Drops, which is loot Call of Duty style, bringing a new reward system of more than 1,000 rewards into multiplayer. Supply Drops reward you with items, including Custom Weapons, Character Gear and Reinforcements.  And these rewards come in three rarities – Enlisted, Professional, and Elite.In addition, to ranking through XP, Supply Drops will be rewarded through play time and in game challenges.

WEAPONS: In Advanced Warfare, players have unprecedented options to find the weapon that best suits their needs. Each weapon features 10 custom options, where cosmetics and attributes vary, which ultimately deliver nearly 350 custom weapons out of the box. On top that, each weapon delivers a spectrum of attachment options, including tried and true attachments as well as all new ones to augment your weapon.

A NEW WEAPON CLASS:The high tech nature of 2054 is coming to multiplayer and there is no better example than the directed energy weapons. The new Heavy Weapons class includes directed energy weapons like the EM1 and EMPm2. These new weapons use the power of weaponized energy to overcome enemies. This class of weapon doesn’t rely on reloads, but instead they are known to overheat after too much activity. 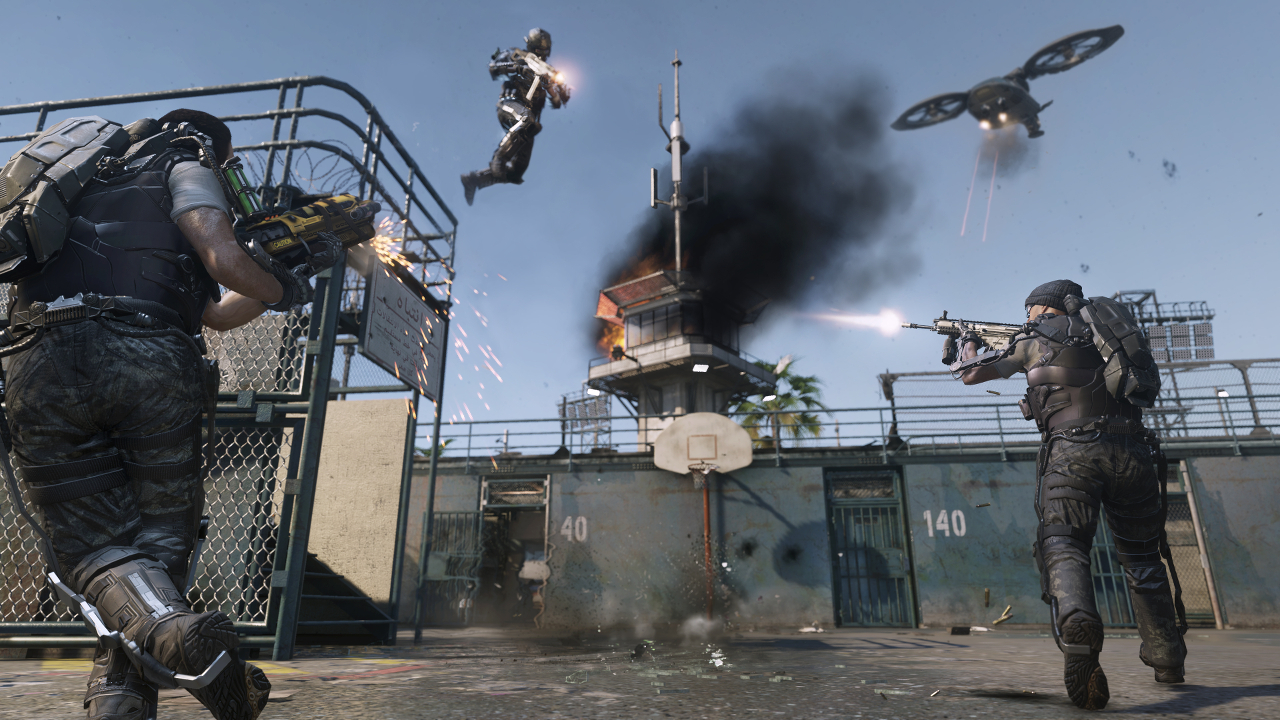 PICK 13: The much loved Pick 10 create-a-class format is back with even more customizable options than before. You can now choose which scorestreaks will be included with your class. This addition to the beloved create-a-class format provides more depth to player strategy and play style. In addition to combining scorestreaks with your class, players can customize scorestreaks to make them more powerful, for a cost. For example, players can customize a Remote Turret into a Rocket Turret Module. In addition to customizable scorestreaks, the game introduces Co-Op Scorestreaks, which for the first time, two players can now join up a scorestreak and work together. This is the perfect example of teamwork for those players that rack up score, with those that may not always get the chance to experience the high-end scorestreaks. Teaming up on a Warbird is a perfect way to gain the advantage on the battlefield.

EXO ABILITIES: Brand new to Advanced Warfare, you now have the opportunity to augment your exo through additional exo abilities. Unlike the exo movements that every player has, exo abilities are selectable within Pick 13. For a slot, of course.   These new exo abilities are activated by the player during the match, and used until the Exo Battery is depleted. 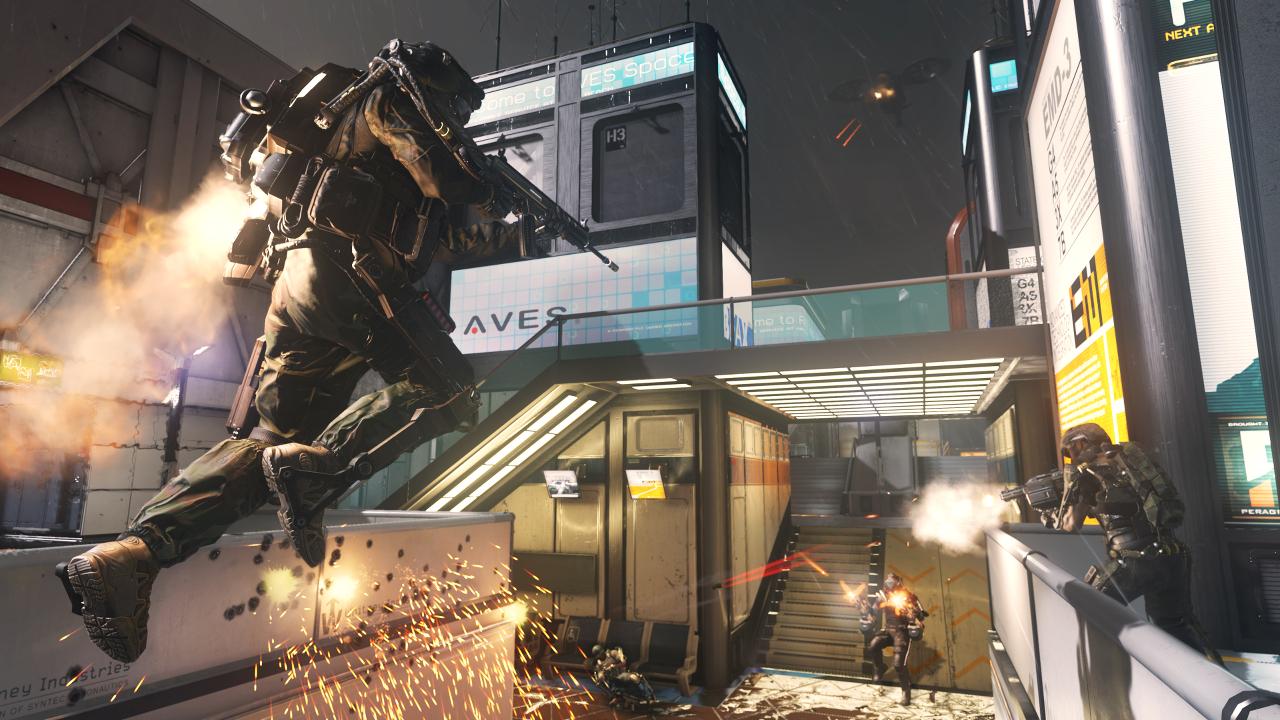 EXO PERKS:A slate of new perks impact exo abilities like a perk that suppresses boost so that it’s quieter and as a result a player’s thrusters don’t give away your location on the mini map.  Another is the gung-ho perk, which allows players to re-load while sprinting, and shoot while sliding. There’s also exo overcharge, which gives players more energy for their exo battery.  Exo Perks take up slots and depend on how players choose to approach their class, but within all customization, there is plenty of flexibility to make your soldier as powerful as you think he can be in the situations you’re playing in.

VIRTUAL FIRING RANGE:An all-new feature, and a first for Call of Duty. From the Create-a-Class menu or between matches, players can instantly hit the Virtual Firing Range to try out a new item with just a press of the button. No map load, no having to blindly go into a match with a new loadout.  Now, players can get an immediate feel for things like the sights, attachments, bullet spread, recoil, and more before the next match even starts.  It’s a great way to test-drive a new weapon before heading into battle.

CHARACTER CUSTOMIZATION: Take your Call of Duty character to a new level by selecting the heads, eyewear, helmets, shirts, vest kits, gloves, pants, knee guards, boots and even the exoskeleton itself. The possible combinations, including selecting male or female characters, are nearly limitless.

VIRTUAL LOBBY:Advanced Warfare transforms the lobby experience for the first time in Call of Duty, providing the personalized true, virtual showcase called the Virtual Lobby. This is where all of a player’s hard work, both XP Progression and Supply Drop rewards are paid-off for all to see. In the Virtual Lobby you can quickly and easily see everyone’s character in all its glory. Just slide over and look at each character in detail. With their loadouts.  With their customization options.  With their rare Supply Drop custom weapons, gear and reinforcements as well as weapons, loadouts and all the gear from your character customization, the Virtual Lobby is the best way to show off to friends, or get a peek at something cool that someone else has earned, and to let your accomplishments speak for themselves. 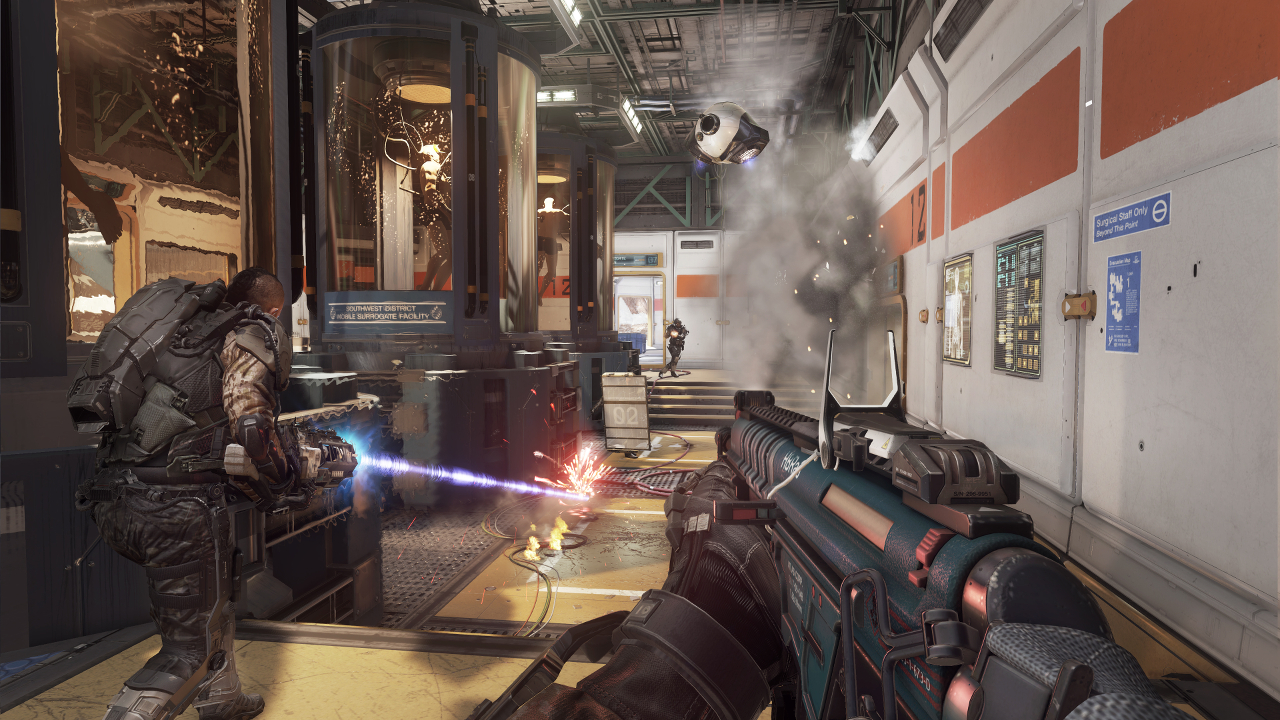 DAY ZERO EDITION: Players have the exciting opportunity to get access to Call of Duty: Advanced Warfare one day early, thanks to the Day Zero Edition. Those that preorder or purchase one of the various collectors’ editions, will be able to buy and play the game on November 3, get Double XP for November 3, two special bonus weapons, and the Advanced Arsenal – that features a custom bullet brass exoskeleton and bonus directed energy weapon, the Quantum EM1. Day Zero Edition quantities limited, availability subject to demand and inventory at retailer locations.  If Day Zero Edition not available at retailer, pre-order customer may receive a pre-order refund, or may purchase a launch unit and obtain a code to download all Day Zero Edition special content.  Visit www.callofduty.com/advancedwarfare/dayzero for more information.