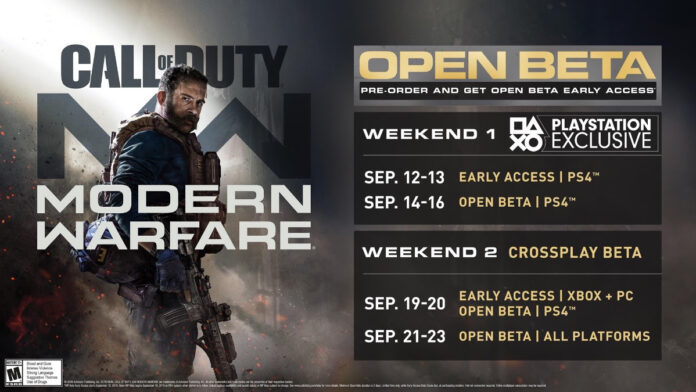 Get an early look at a collection of several maps and modes Call of Duty: Modern Warfare has to offer before it releases on October 25. Be among the first to experience the intense multiplayer action, ranging from the quick, close quarter 2v2 Gunfight mode, to traditional 6v6 multiplayer gameplay and larger player count firefights. Try new gameplay mechanics, including bullet penetration, gun mounting, door breaching and night vision multiplayer gameplay maps featuring night vision goggles (NVGs) that allow for an amazing tactical experience.

What’s the plan for the beta?
There are two weekends of Modern Warfare Beta content, each “weekend” lasts a total of around five days; scheduled to begin each Thursday morning at 19:00 (CEST) and ending on Monday afternoon  (with exact content conclusion timing still to be decided).

The first two days of the weekend – Thursday, September 12, and Friday, September 13, – are available for early access to players who have pre-ordered the Modern Warfare on PlayStation 4. Check your local retailer or online here for pre-order information.

The first two days of the weekend – Thursday, September 19, and Friday, September 20, – are free to all PlayStation 4 owners and do not require a pre-order. In addition, anyone who has pre-ordered the game on Xbox One, or on PC via Blizzard Battle.net also can play starting Thursday, September 19. If you’re an Xbox One or PC owner and want to play Weekend 2 of the Beta for the longest possible time, be sure to pre-order. Check your local  retailer or online here for pre-order information.

The rest of the Open Beta period, running from Saturday, September 21, to the morning of Monday, September 23, is accessible to all players on PlayStation, Xbox One, or PC, regardless of pre-ordered status. If you’ve got an Xbox One, Xbox Live Gold is required to play. If you have a PC, a Battle.net account is required to play. Other than these prerequisites and an internet connection, you should have everything you need to play. And reminder, the Weekend 2 of the Beta Test will include crossplay.

Pre-order Modern Warfare to play the Beta Test for the longest possible time. Once you pre-order, you’ll be able to access a Redeem Code. For more information on the Beta and early access keep reading here.