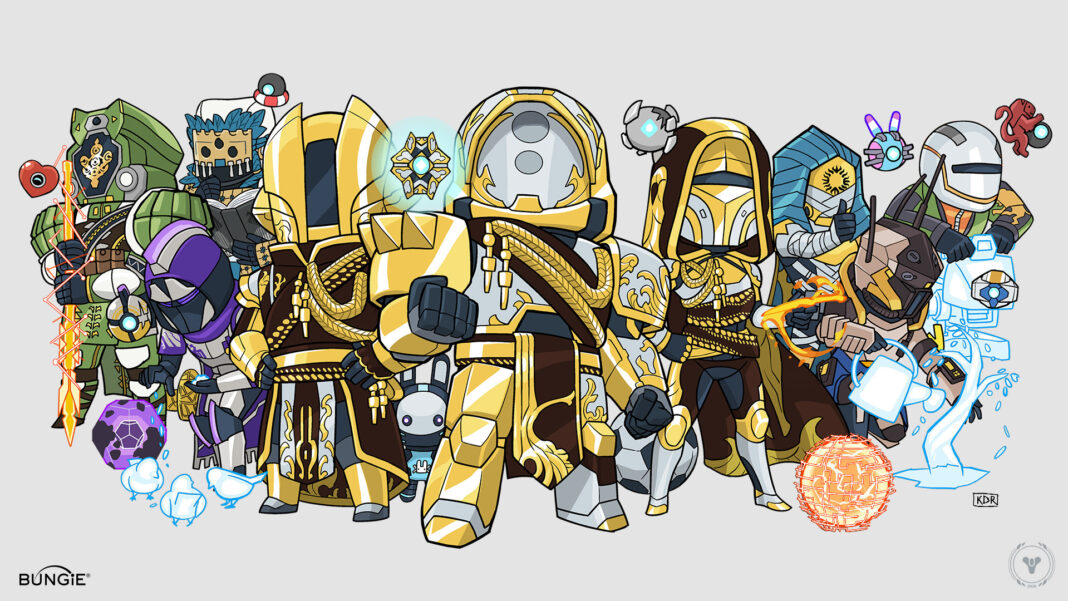 On this day, six years ago, players all over the world began a grand adventure. Since then, over 167 million Guardians have joined our ranks and championed the Light for over 8.6 billion hours; the same amount of time it takes light to travel from the Sun to the Earth on 4,806 occasions. During that period, this community has answered the call time and time again, raising over $8.5 million for Little Lights and worthy causes all over the world. So, when it comes to defending humanity, whether you’re in the 31% that smash, the 31% that love space magic, or the 38% that make cloaks look good, we’re humbled that you have chosen to make the Tower your home. And now, as we stand at the precipice of a new era, ready to step Beyond the Light, we should at least have some cake first. From the Farm to the Moon, it’s been a wild ride and we’re incredibly proud to have you at our sides for all of it. Here’s to the future, let’s light the candle and celebrate with friends – happy birthday, Destiny.

Starting on September 22, Destiny 2: Shadowkeep and Destiny 2: Forsaken expansions will be available to Xbox Game Pass subscribers!
Destiny 2: Beyond Light will allow players to embrace the darkness on November 10th. Fans on Xbox will want to jump in with their Xbox Game Pass now to prepare for their trip to Europa!

Celebrations from the Bungie Store – New Collectibles and HD Wallpaper

A new poster inspired by some of Destiny’s most beloved characters went live on the Bungie Store today (US/EU), but if you can’t wait for shipping to get it to you, a glorious digital HD version awaits you on Bungie.net.

Alongside the poster mentioned above, there’s also a new birthday mug, t-shirt, and if your sweet tooth isn’t sated by the cake you just baked (we’ve got a recipe for that!), check out the new Destiny cookie cutter set.

Infinite cake technology still eludes us, but Victoria Rosenthal is getting closer! Not one to slow down after knocking it out of the park with the official Destiny cookbook, she’s here to share her “Infinite Forest” Chocolate Cake with all of us.
Can’t wait to get infinitely lost in these layers.
If you’d like to make your own “Infinite Forest” Chocolate Cake, you can check out the recipe to celebrate with us. Make sure to tweet us your cakes!

Last week, Bungie revealed new details at the Warlock Shadebinder and the Titan Behemoth, outlining its abilities and highlighting how Stasis will change the way Guardians will explore the universe of Destiny 2. The final deep dive focusing on the Hunter Revenant just released yesterday – a fireteam needs three!

From Bungie, thank you for being part of this incredible community and the memories we’ve made starside together. See you on Europa November 10th!