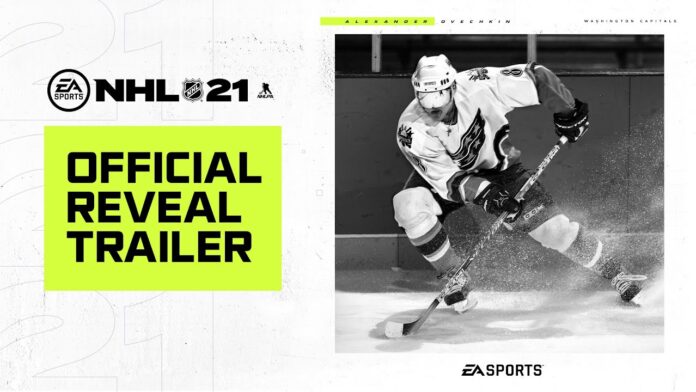 Electronic Arts Inc. (NASDAQ: EA) announced today that EA SPORTS™ NHL®21 is coming to the PlayStation 4 And Xbox One on October 16 and unveiled a first look at Stanley Cup® winner Alex Ovechkin as the game’s cover athlete, for the second time. Ovechkin has been one of the most influential and impactful players in hockey and has become something of a muse for the development team, mapping the game’s innovation against the game-changing impact he has had on the sport. This iteration of the franchise brings to life a revamped Be A Pro experience, expanded creative gameplay, the new Hockey Ultimate Team (HUT) RUSH, and World of CHEL additions offering players the opportunity to create an Ovechkin-esque style and legacy.

“It’s a huge honor to be on the cover of NHL 21 for the second cover in my career,” said Alex Ovechkin “More importantly, I’m glad I’m looking just as good on the cover this year as I did in 2007!!!”

NHL 21 delivers a fresh feel to the franchise with an overhauled Be A Pro mode. The brand new Be A Pro experience enhances the game’s narrative and quality of life, giving players the chance to live the life of an NHL star, both on and off the ice. Impress the front office, go early on draft day, and chase greatness as players earn a spot on the first line, compete for the Stanley Cup, and become the league’s next best.  Players can work their way from a chippy bottom six forward to a must-see superstar.

“Our community has been asking for an invigorating Be A Pro experience that puts them in the same spotlight as their favorite NHL stars, like Alex Ovechkin,” said Sean Ramjagsingh, Executive Producer of NHL 21. “Ovechkin’s gameplay legacy, on and off the ice, is helping us to bring the next generation of EA SPORTS NHL gameplay to life with NHL 21.”

Gameplay in NHL 21 has also gotten smarter, faster and a whole lot flashier with innovative moves and massive improvements on both sides of the puck. Players now have more options than ever before to take control of the game and impose their playstyle on opponents. Players can dazzle with slips, banks and chips, while pulling off some of the most recognizable superstar-inspired moves. However, players will also have to deal with improved goalie positioning and control, as netminders are adapting to the game’s skill level faster than ever before with brand-new desperation moves and animations.

This year’s iteration also takes HUT, the game mode that allows players to create their fantasy lineup of NHL players, alumni, and icons, and compete with them online, to the next level with HUT RUSH. HUT RUSH is a streamlined version of HUT that lets players jump into HUT games quickly, rack up achievements, and unlock rewards by scoring with style. With a scoring system that rewards skill and creativity, HUT RUSH will provide plenty of cannot miss moments.

In World of CHEL, the new Ranked Seasons allow players to compete across each of the four modes – ONES, THREES, Drop-In or Clubs – to earn rewards and play in the new EASHL Club Finals. Player and team success will be rewarded with unique gear, items and vanity sets to flaunt domination.

Additionally, Franchise Mode adds an exciting experience for one of the marquee events of every season: the Trade Deadline. Players will feel the pressure of the approaching deadline with real-time updates that lead to important decisions on which players to target and trade for. Just like the real trade deadline, the market value of players will fluctuate as the day goes on, and live trade alerts will move rapidly via the trade deadline ticker.

In addition to pre-order incentives, NHL 21 will offer a Veteran Bonus to longtime fans of the franchise, by rewarding up to 10 HUT loyalty reward packs based on the player’s ownership of the past three EA SPORTS NHL titles.

NHL 21 will be available on October 16, 2020 for the Xbox One and PlayStation 4. Members of EA Play can be among the first to interact with new features a week early on October 9. For more information on EA SPORTS NHL, visit easports.com/NHL.

EA SPORTS, Battlefield, Apex Legends, The Sims, Need for Speed, Titanfall and Plants vs. Zombies are trademarks of Electronic Arts Inc. FIFA is property of its respective owners and used with permission.

The National Hockey League (NHL®), founded in 1917, consists of 31 Member Clubs and proudly welcomes its 32nd franchise, the Seattle Kraken™, for the 2021-22 season. Each team roster reflects the League’s international makeup with players from more than 20 countries represented, all vying for the most cherished and historic trophy in professional sports – the Stanley Cup®. Every year, the NHL entertains more than 670 million fans in-arena and through its partners on national television and radio; more than 151 million followers – league, team and player accounts combined – across Facebook, Twitter, Instagram, Snapchat and YouTube; and more than 100 million fans online at NHL.com. The League broadcasts games in more than 160 countries and territories through its rightsholders including NBC/NBCSN and the NHL Network™ in the U.S., Sportsnet and TVA in Canada, Viasat in the Nordic Region and CCTV and Tencent in China. The NHL reaches fans worldwide with games available online in every country including via its live and on-demand streaming service NHL.TV™. Fans are engaged across the League’s digital assets on mobile devices via the free NHL® App; across nine social media platforms; on SiriusXM NHL Network Radio™; and on NHL.com, available in eight languages and featuring unprecedented access to player and team statistics as well as every regular-season and playoff game box score dating back to the League’s inception, powered by SAP. The NHL is committed to building healthy and vibrant communities through the sport of hockey by increasing youth participation and engagement; fostering positive family experiences; promoting inclusion, positive culture and leadership; and supporting sustainable community impact.

NHL, the NHL Shield, and the word mark and image of the Stanley Cup are registered trademarks of the National Hockey League. NHL and NHL team marks are the property of the NHL and its teams.  © NHL 2020.  All Rights Reserved.

EA SPORTS™ NHL 20 is an Officially Licensed Product of the NHLPA. NHLPA, National Hockey League Players’ Association and the NHLPA logo are trademarks of the NHLPA. © NHLPA. All Rights Reserved.