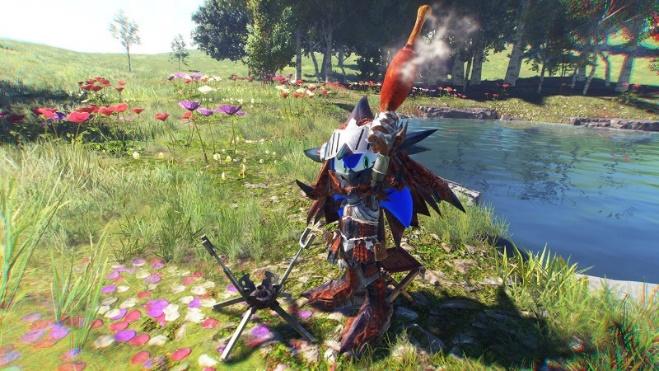 In addition to the costumes, the DLC includes a meat grilling minigame inspired by Monster Hunter to help power Sonic up.

To further commemorate the partnership, both the Monster Hunter development team and Sonic Team have created celebratory art that merges the action and aesthetics of both worlds.

The Monster Hunter Series
The Monster Hunter series consists of hunting action games that pit players against giant monsters in a beautiful natural environment. Beginning with the first title in 2004, the series established a new genre in which players cooperate to hunt ferocious monsters with their friends and has since grown into a global phenomenon.

Sonic Frontiers
Sonic Frontiers is a new open-zone, action-adventure game, where Sonic sets off on a new adventure in the mysterious Starfall Islands in search of the missing Chaos Emeralds.

Along the way, he discovers an ancient civilization where mysterious ruins and enemies’ roam, to search for his lost friends and uncover the history of the ancient islands.

The new high-speed, open-zone platforming gameplay gives players the freedom to explore the Starfall Islands any way they choose at speeds only Sonic can deliver with no pre-determined path. Sonic Frontiers is a massive leap for the franchise, taking Sonic into the future of 3D action games with an all-new playable world map, while paying homage to previous, beloved titles.

The Starfall Islands are filled with diverse environments, ancient structures and mysterious secrets, with each zone offering their own unique activities including platforming, combat, puzzles, side quests, Cyber Space and more. These features can be played in any order to match your play style.