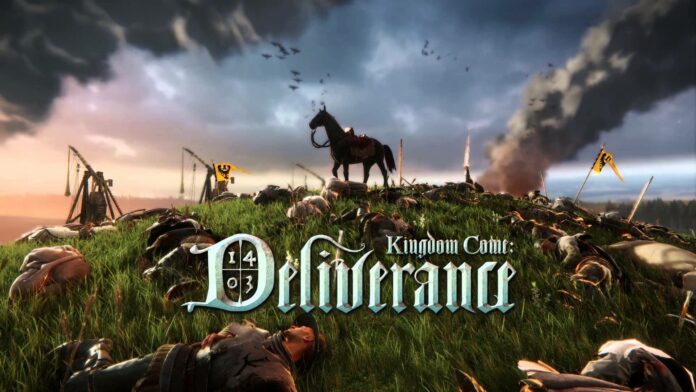 The Treasures of the Past unlocks unique treasure maps and additional ingame armour for Henry.

As the newly appointed bailiff players have to decide which structures to build first, how they want to attract peopleand how to settle disputes amongst the citizens. A bailiff’s lot is hard for sure, but even he can enjoy some fun after a hard day’s work. Taking one of the new horses for a ride, rolling the dice or just visit the local tavern – which he just ordered to be assembled – are just some of the activities that are introduced to the game with From the Ashes.

Amorous Adventures challenges players to help their friend Hans Capon. Hans is in love and he needs Henry’s guidance to conquer the heart of beautiful Karolina. However, things turn out to be trickier than expected. A lost family jewel, a magic love potion and the most romantic poem of all promise many hours of new fun moments in Kingdom Come: Deliverance.

This add-on lets players accompany a group of mercenaries guarding the roads. Caught in a web of old, well fertilized hatred between Radzig Kobyla and another noble family they are hired to protect Radzig’s realm. Players will join this group of troubling men, led by the notorious Sir Kuno Baron von Rychwald, not only to assist them, but also to keep them in line.

In “A Woman’s Lot” you play as Theresa accompanied by her loyal dog Tinker in a standalone questline. You will experience the ordinary life in Skalitz and later witness fateful events of Sigismund’s raid from a completelydifferent perspective. “A Woman’s Lot” provides the last puzzle of the Skalitz story, as you find out what happened just before Henry was found unconscious.

About Kingdom Come: Deliverance Kingdom Come: Deliverance is a story-driven open-world RPG that immerses you in an epic adventure in the Holy Roman Empire. Avenge your parents’ death as you battle invading forces, go on game-changing quests, and make influential choices. Explore majestic castles, deep forests, thriving villages and countless other realistic settings in medieval Bohemia!