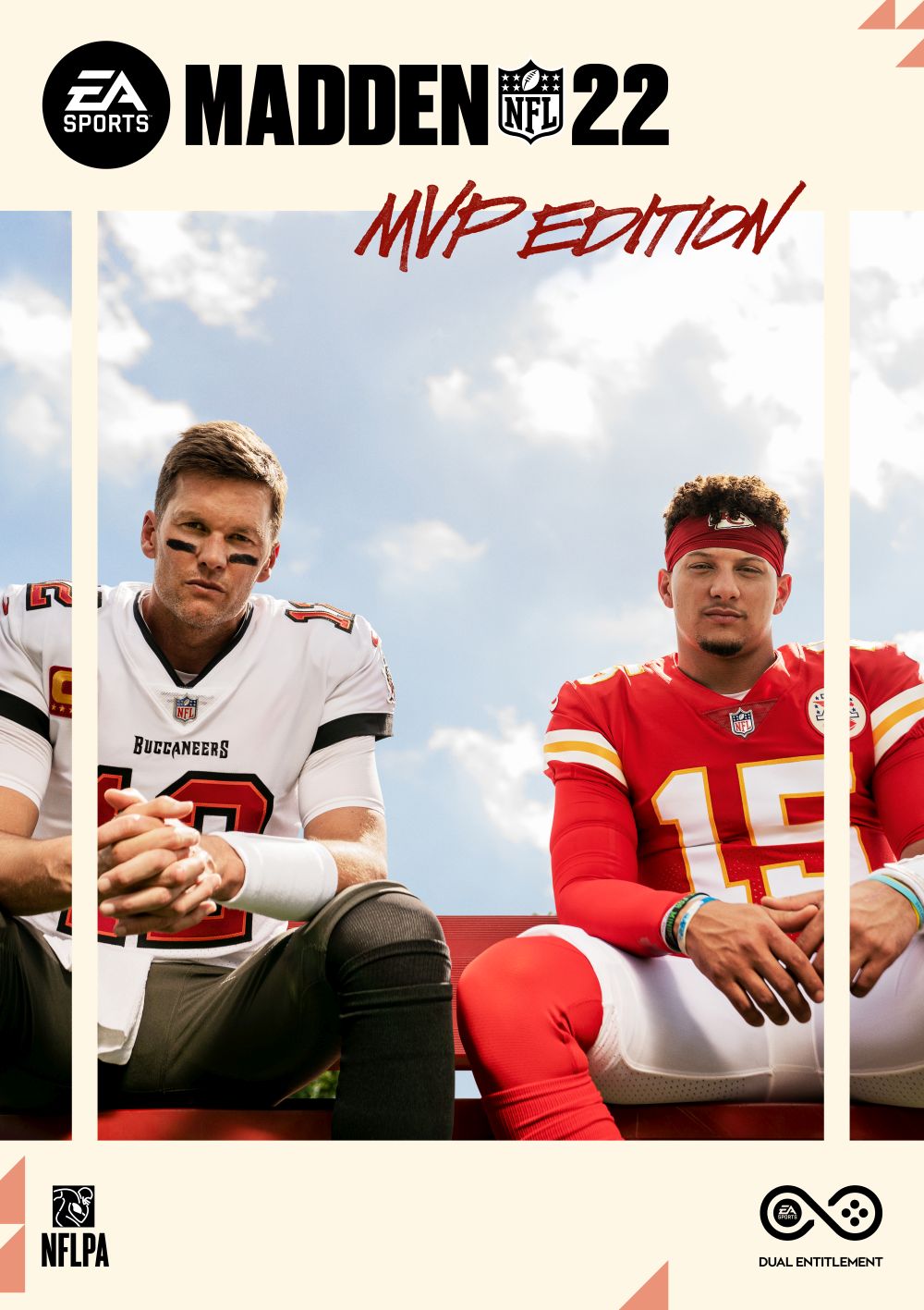 Today, Electronic Arts Inc. (NASDAQ: EA) announced EA SPORTS Madden NFL 22featuring two NFL Super Bowl champions, MVPs and icons of sport culture, Tom Brady and Patrick Mahomes on the cover across all editions and Madden NFL Mobile. Madden NFL 22 leverages the power of next generation consoles to deliver the raw energy, emotion, and unpredictability of the NFL through brand-new Dynamic Gameday*, which impacts gameplay across every mode.Whether installing a weekly gameplan in Franchise or going head-to-head in Play Now, games in Madden NFL 22 will feel fresh with a deeper level of strategy and storytelling in each match-up and in each stadium. EA SPORTS also gave fans their first look at new Madden NFL 22 gameplay in an exciting reveal trailer released today. Madden NFL 22 launches worldwide August 20th for PlayStation®5, Xbox® Series X|S, PC via Origin™ and Steam, Xbox One, PlayStation 4, and Google Stadia.

“It’s a great experience being on the cover of Madden NFL 22 with Patrick. We both share a love for the game of football and to be a part of this iconic franchise is very special,” said seven-time Super Bowl Champion Tom Brady. “This year’s game really captures the energy and unpredictability that you see on the field every Sunday and we’re excited for fans to experience it for themselves.”

“I, like most players in the League, have been a big fan of Madden NFL for as long as I can remember, and to be on the cover – not only for a second time, but also with Tom Brady, an all-time great – is surreal,” said Patrick Mahomes. “This is only the second time two athletes have been on the cover together and we’re both eager for fans to dig into Dynamic Gameday which makes the game more immersive, authentic and keeps it fresh year-round.”

Dynamic Gameday* in Madden NFL 22 is powered by three new features: Gameday Atmosphere*, Gameday Momentum* and Next Gen Stats: Star-Driven AI*. Gameday Atmosphere* connects players to their NFL fandom through the crowds, environments and presentation elements that enhance and impact every game. New Gameday Momentum* performance-based mechanics, includingHome Field Advantage* which provides a unique game condition tailored to each NFL team’s stadium atmosphere,  swing momentum, bringing the tangible influence of momentum to life on the field. Lastly, Next Gen Stats: Star-Driven AI*, powered by real world player data that will evolve throughout the season, changes AI behavior and team tendencies to make NFL superstars and the personality of each team more true-to-life.

“Last year, we had more players than ever in Madden and we’re looking forward to bringing a new experience in Madden NFL 22 that will be more emotional, authentic and realistic with Dynamic Gameday improving gameplay across the game,” said Seann Graddy, Executive Producer of Madden NFL 22. “We’re always collecting feedback from our players to improve Madden NFL with each edition and in real time with our live service during the year. We’ll continue that approach this year, including doubling down on our commitment to Franchise, maintaining the momentum we started in Madden NFL 21, by delivering more of the top-requested Franchise features both at launch and throughout the season.”

Franchise Mode in Madden NFL 22 will make players feel more connected and in control of their team, with more detailed staff management and skill tree progression systems, and comprehensive weekly game strategy with a revamped Season Engine that keeps things fresh every week. Franchise will also continue to see improvements throughout the year via multiple live service updates.

Madden NFL’ s newest mode, The Yard, will feature an all-new single player campaign and avatar progression system that shares progress, rewards and vanity with Face of the Franchise. Face of The Franchise returns with an all-new story, player class system and the option to play on the defensive side of the ball as a linebacker for the first time. Superstar KO will bring multiplayer squad play to NFL teams with the addition of real world NFL teams to the mode for the first time. Plus, Madden Ultimate Team will deliver a new season of content, allow for halftime adjustments to Superstar X-Factors and integrate Next Gen Stats* to track stats for player items.