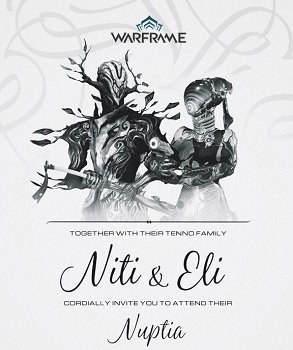 “We don’t get out much due to health issues, and our entire social life is online. As such we have friends from around the world.  We had discussed ways of trying to get all of them there for our wedding, and came to the conclusion that it was impossible, we have friends in Denmark, Japan, America, Canada, Germany and England… it just wasn’t going to be possible to get everyone in one place. We also felt that our online persona really is us, it’s how we interact with the rest of the world, how we see our friends, how we talk to them. So the idea of having an online wedding was banded about, but until Warframe we had no idea of how to do it, or where to do it.”

“We have spent months chilling, designing, and jumping about our dojo in game, It’s how we have gelled as a clan, and after spending so much time in our clan Dojo, it became like our home. One day Niti suggested that we ask if we could have our wedding in Warframe. I thought it was a great idea, but that DE would never agree… she kept at it, and badgered me to ask… which I did, not expecting a reply.”

“We were both stunned and amazed that DE said yes, and when we told the rest of the clan (and my family) they all were super excited about it. It allows us to have our wedding in a place we call home, in our favourite game, and with the people that we care about being able to be there in “Person” as it were. We could never have hoped to get everyone in the same place before. Now, not only can people be there who normally couldn’t, but also they can be there in a form that allows them to express who they feel they are, which makes the whole event that much more personal for us than everyone turning up in suits and ties.  It has also allowed my (Elis) grandmother to watch the event live, which has made her very happy as she isn’t very well at the moment, and could never have travelled to be there in person, so its extra special for us.”