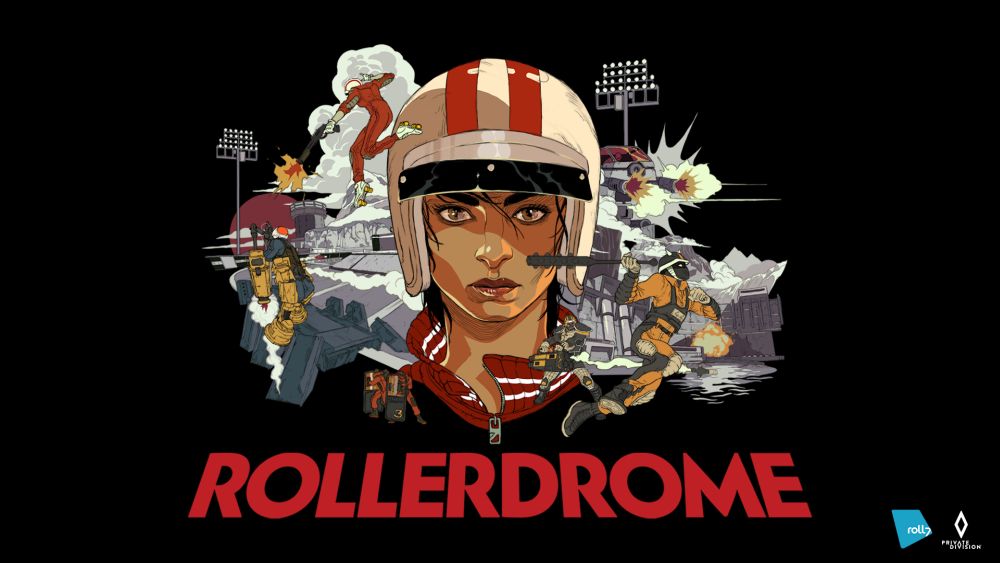 Private Division and Roll7 today announced that Rollerdrome will launch on August 16, 2022 for digital download on PlayStation®4, PlayStation®5 system and on PC (Steam). In this single-player, third-person shooter, players experience the thrill of fusing fluid movements and stylish tricking mechanics with adrenaline-pumping shooter action. This wildly imaginative shooter-skater hybrid game is set in a darkly dystopian retrofuture and is being developed by Roll7, the creators of the critically acclaimed OlliOlli World and masterminds of flow state gaming.

Rollerdrome introduces a distinct retro-futuristic universe with a unique identity. The comic-book inspired art style comes to life with an all-new and fully original soundtrack. The Darksynth musical artist Electric Dragon merges iconic 1970’s textures and sounds with modern day driving beats and cutting-edge production to provide a heart-thumping backdrop to the carnage.

The game is set in 2030, in a world where the public are kept distracted from an increasingly sinister political situation by the violence and excess of a brutal new arena sport: Rollerdrome. The lines between reality and performance in this bloodsport are blurred, with participants chosen to compete in a series of gauntlets against the deadly House Players. Competitors in this vicious spectacle attempt to achieve the highest score possible by combining eliminations with flashy tricks while also successfully completing numerous challenges.

Players step into the roller skates of Kara Hassan, a newcomer to this brutal sport. As the mysteries of a wicked tech giant unfold behind the scenes, Kara and the player will have to stay focused on their goal – climbing the ranks in hopes of becoming the next Rollerdrome champion.

“It’s been amazing to see this project come to life from the original prototype that received a lot of love online, all the way to the brutal and intense experience it is now – thanks to the amazing work of the team at Roll7″ says Paul Rabbitte, Creative Director at Roll7. “We’re really excited for players to jump into Rollerdrome.”

“Roll7 have proven that they successfully come up with truly innovative games that combine original gameplay with an outstanding art style,” said Michael Worosz, Chief Strategy Officer, Take-Two Interactive, and Head of Private Division. “Rollerdrome is another prime example of their innovative spirit as this talented group once again pushes the boundaries of movement with this wholly unique shooter experience.”

Rollerdrome is developed by Roll7, the BAFTA and multi-award-winning London based studio famous for re-defining genres and creating remarkable games like OlliOlli, OlliOlli 2: Welcome to Olliwood, OlliOlli World, Laser League, and NOT A HERO.