After a lifetime of loving Bomberman, developers Chris and Mike were sick of waiting for the game to arrive on console and PC with all the features they wanted and so they went and made Blast Zone! Tournament  – the biggest love letter to Bomberman that you’ll ever see.

Blast Zone! Tournament is a premium title marrying Bomberman gameplay with Overwatch and Rocket League-inspired functionality. The game is packed with a ton of multiplayer modes and thousands of customisable in-game rewards as well as a sophisticated progression system and esports-ready features. 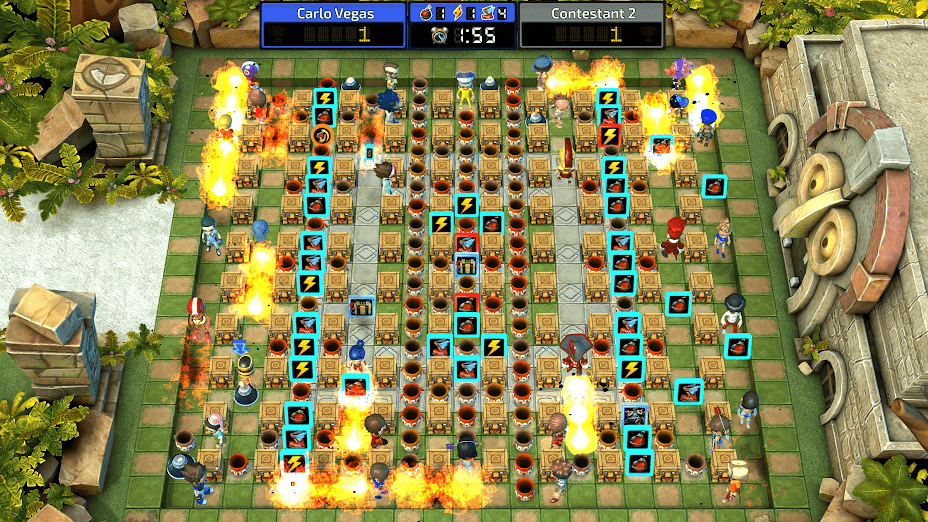 Independent game developer Victory Lap Games, founded by ex-Insomniac developers Chris Pfeiffer and Mike McManus, today announced that its Bomberman-inspired title Blast Zone! Tournament will be exploding onto PlayStation®4, Xbox One and PC in late 2018. Drawing on their experience of working on blockbuster titles such as Ratchet and Clank and Resistance: Fall of Man, Victory Lap Games has created the ultimate love-letter to the bomb-based strategy genre by adding an explosive array of multiplayer modes, levels and gameplay options plus thousands of character rewards and customisations.

Aiming to deliver the ultimate multiplayer experience for both console and PC gamers, Blast Zone! Tournament is a treasure trove of cross-platform multiplayer riches. At its core, up to 8 players can compete locally on their couch, or they can take the battle online in 32-person multiplayer frenzies. Where the game really shines is its ability to combine and customise the two options, allowing gamers to host 32-player matches with endless combinations of couch-based local teams and online players. Multiplayer will also work PC to PlayStation®4 and PC to Xbox One. Gameplay takes place across seven distinctly themed locales including a tropical jungle, a pirate ship on the high seas, and even the most notorious of venues – a smoke filled 1990s dance club.

Once players have teamed-up, they can select from up to 10 unique multiplayer modes, including traditional Team Deathmatch, Bomb Blast in which the dynamics change as bombs are used to paint floor tiles and King Mode – an attack vs defence scenario in which teams must protect a VIB (a Very Important Bomber). Each of the ten modes can be played across 280 levels that can be customised down to the very last detail.

For competitive players, Blast Zone! Tournament will be optimized for esports play at launch.

Blast Zone! Tournament will launch as a premium priced digital download via PlayStation®Store, Microsoft Store and Steam in late 2018 priced at $19.99.

● 32- player cross-platform multiplayer either local, online, or combined. Multiplayer matches each have unranked and ranked options to cater to both casual players and hardcore fans

● Robust set of social features from friends lists to partying, news, mail, and more to help foster a healthy community and lay the foundations for esports tournaments