1. The Space Station (Talos 1):
The history of the space station that serves as the setting Prey is long and fascinating. It all started in 1958, when the Soviet Union sent a satellite into space as a part of their space program. After a strange shutdown of the satellite’s communications, the russians sent a team of cosmonauts to investigate. When they reached the satellite, the cosmonauts was attacked by an alien life form (the Typhon), all members of the mission was lost. Soviet Union and U.S.A. then combine forces, in 1963 Khrushchev and Kennedy established the Kletka program, the purpose was to study and analysis the alien creatures. A space station was built around the remains of the satellite, which will remain operational until 1998, when a failure of the containment structure of the alien destroys all the inhabitants of the station. It remains all frozen until 2030, when Transtar, a private corporation, secured the station and transformed it to Talos I, a cutting edge innovation station.The beautiful resort, with the stunning architecture, is operational again and Morgan Yu adventure is ready to begin. 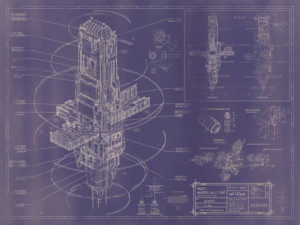 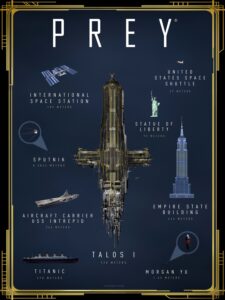 2. The Powers:
As Morgan Yu, you might be mankind’s last hope aboard Talos I, but you’ve got a mighty arsenal to face down the Typhon threat. Along with the human abilities like Hacking, Leverage, Repair, and Gunsmith – all of which enhance Morgan’s innate strengths – you will have access to three distinct trees of Typhon-based abilities. Of course, there’s some risk when rewarding yourself with these amazing alien abilities. As you install alien powers, the turrets on the station will view you as a hostile entity, and you will increasingly run the risk of being targeted and hunted by the massive Nightmare Typhon.
Among the many skills available, we find the Mimic Power, camouflage yourself by taking the form of a nearby object, be it a cup, a lamp or a fruit, until you get to more complex objects such as a turret. There is also, the Remote Manipulation, Morgan will be able to interact with objects distant from him and we also have the power to reverse gravity. All this and much more is available to the player, and you will be able to chose yourself how to deal in the various situations you end up in.

3. The Weapons:
Your companion for the whole course of the game will be the wrench. It might be your first weapon, but don’t dismiss the Hephaestus “Heffy” Twist and Loop Handle Industrial Wrench just because it’s decidedly lo-fi. As Morgan Yu, you will have a full arsenal of killer gear. From the simple wrench to a powerful shotgun to more exotic devices, Morgan has more than enough options to suit his needs. Keep in mind that these weapons (and their ammo) are somewhat limited by design. Talos I is a corporate research facility in outer space, after all. That said, players will find more “exotic” weaponry, thanks to the ingenuity of the scientists aboard Talos I… and the need to stop the Typhon if they ever broke out of containment. One of the most versatile is the GLOO Cannon, which fires a stream of quick-hardening foam.
4. Aliens:
The main threat of Talos I are aliens, called Typhons. Kept under lock and key since the 60s inside the space station, these aliens have extraordinary abilities, ranging from imitation to teleportation and telepathy, each of them has unique skills that scientists want to be able to replicate the human being. Their appearance is changing, passing from being the size of a ball softball to resemble humanoid creatures, and consist of a strange dark substance.

5. Play any way you want:
Embracing its signature style, Arkane Studios is building what it’s calling an “open space station game,” complete with the studio’s characteristic freedom and player choice. Player will have the ability to act according to his will, and on every moment choose how to proceed. Prey will provide a sampling of skills, weapons and strategies that allow you to advance the main story and not necessarily follow a predetermined path, and being able to invent every time new ways to proceed. “Play your way” will be the real mantra of the space adventure.