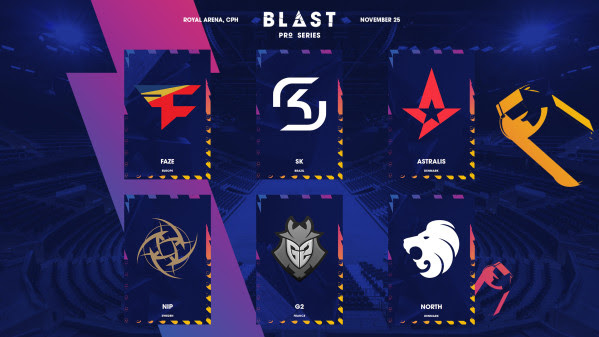 BLAST Pro Series is created to optimize the fan- and viewer experience of live Counter-Strike (CS:GO). Six of the best teams in the world will battle it out live on stage in Copenhagen’s Royal Arena, and the full match schedule has already been announced, so fans can prepare and follow the tournament or their favorite team.

Today, the maps for all the group stage games have also been announced on the basis of a pick and ban phase done by the six participating teams online.

Announcing the match-ups and maps well in advance of the tournament is new to CS:GO and we believe that the openness and announcements well ahead of tournaments is needed to open esports up to a new audience while serving the existing fans even better.

FOLLOW THE HOURLY ANNOUNCEMENTS ON OUR SOCIAL MEDIA CHANNELS!

Why we do it

There are several reasons to why we have chosen to perform the map vetos well ahead of the tournament:

BLAST Pro Series will open on Friday, November 24 with two group stage rounds played at a separate venue. Saturday, November 24, the three decisive group stage matches and the Grand Final will be played in front of more than 10,000 spectators in Copenhagen’s Royal Arena.

A limited number of tickets in most categories are still available via blastproseries.com.