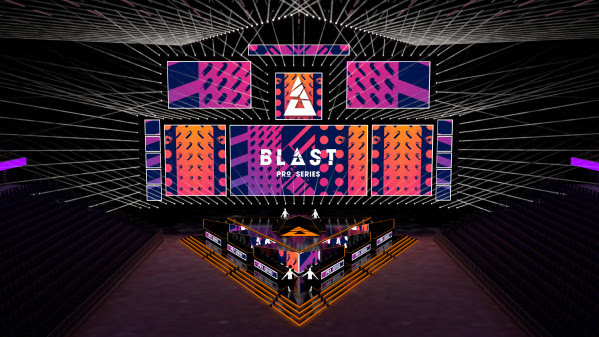 On November 25, when Copenhagen’s Royal Arena opens the doors to BLAST Pro Series, the tournament’s iconic two level “A Stage” will be presented live for the first time ever. The stage itself covers the same area as a Hercules freight plane, the digital screens behind it will be the biggest ever in CS:GO and the massive light and sound set-up will match most concerts held in the popular arena.

BLAST Pro Series, with 6 of the world’s best Counter-Strike teams competing on stage, is set to break all records and boundaries and the series is set to go on the road in 2018, where fans in the America, Europe and possibly Asia will be able to experience the newest tournament and live format thatesports has to offer.

The stage is designed to fulfil the unique requirements for the BLAST Pro Series format. It’s built to scale in elements, meaning that the same stage will be transported around the world for the future versions of BLAST Pro Series.

The stage is shaped after the iconic “A” in the BLAST Pro Series logo. On the two sides facing the audience, the 6 teams have their fixed positions and computers, and on the tip in front, the event host will face and be close to the audience. On the stage’s second floor, the casters of the 3 games and the analyst desk will oversee and comment every move in every game, making sure the audience will not miss a single highlight. Players join the desk on stage after each round.

On the screens behind the stage, it will be possible to follow all 3 games simultaneously. The main game will be shown on the main screens, which will all have new or improved visuals for a clean, cool and optimal fan experience. The main screen will be a clean version of the game itself and for the hardcore fans, up-to-date statistics, fun facts and updates will be found. On two other big(!) screens the other games will be shown, with highlights and decisive moments on the main screen. For the Grand Final, all screens will be in use, giving the audience a complete insight in the game, players and in-game action.

Everything in BLAST Pro Series is designed with the game, fans, online viewers and players in mind. The state-of-the-art arena allows us to play with a complete 3D sound experience, supporting the in-game action.

The computers are the very latest OMEN by HP models:

6 of the best teams in the world will be on stage for BLAST Pro Series:

Friday night (November 24):
Two rounds will be played online in a separate venue. Tickets for Saturday do not give access to the Friday games.

Tickets: New tickets for the fanzone and the BLASTZone have just been released and 8,000 out of the initial 10,000 tickets have been sold. The capacity can be increased to +11,000.

The full program for the two online rounds Friday night and the three decisive group stage rounds and the grand final in Royal Arena on Saturday will be announced soon.