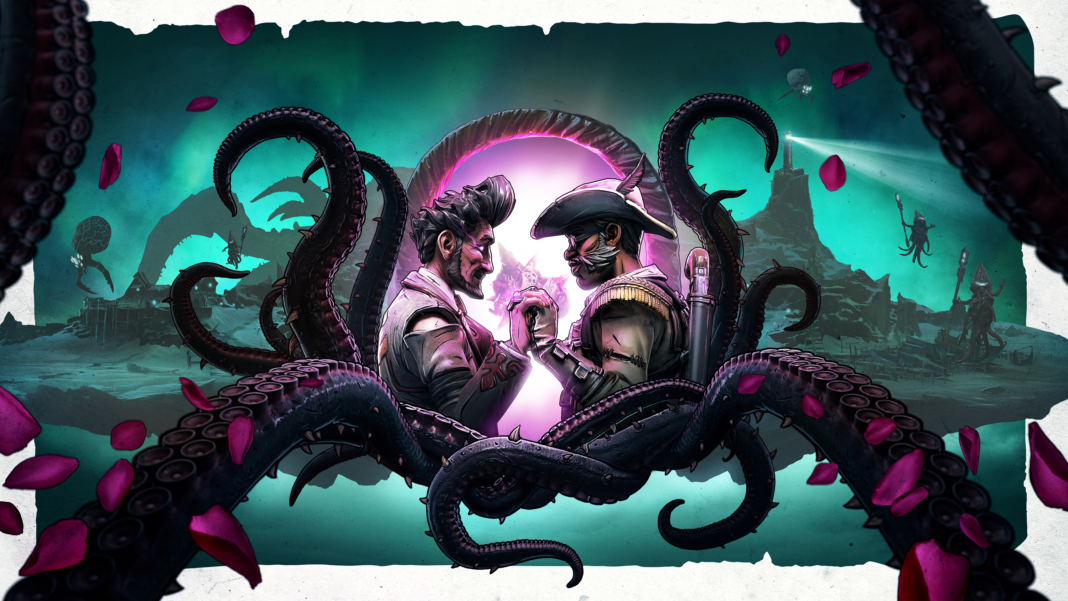 First, on March 13, Borderlands 3 will launch on Steam, with PC crossplay between Steam and the Epic Games Launcher. Thanks to some new SHiFT matchmaking functionality, you’ll be able to add friends to your Friends List, join co-op parties, and play together online regardless of which PC platform each player is using. Gearbox plans to roll out additional PC crossplay features – such as the ability to mail weapons across platforms – in the weeks following the game’s launch on Steam. Aspiring Vault Hunters can add Borderlands 3 to their Steam Wishlist now.

Then on March 26, you can dive into Borderlands 3‘s second campaign add-on for a surprisingly dangerous engagement party in Guns, Love, and Tentacles: The Marriage of Wainwright & Hammerlock. Sir Alistair Hammerlock and Wainwright Jakobs are finally tying the knot, and they want you to come celebrate their upcoming nuptials on the ice planet of Xylourgos. Its frozen wastes have thinned out all but the most vicious wildlife, and the eerie town of Cursehaven – where you’ve all agreed to meet – is located beneath the colossal carcass of a fallen Vault Monster.

As if this ice world’s biting cold and vicious wildlife weren’t unwelcoming enough, a band of creepy occultists who worship the Vault Monster’s carcass are hellbent on breaking up the betrothed partners. You’ll have to fight back the forces of otherworldly evil if Wainwright and Hammerlock are to have their happily ever after. Luckily, the most badass wedding planner in the galaxy has your back: Gaige, a fugitive Vault Hunter (and returning fan-favorite character) who’s inseparable from her robot BFF Deathtrap. And that’s not all: