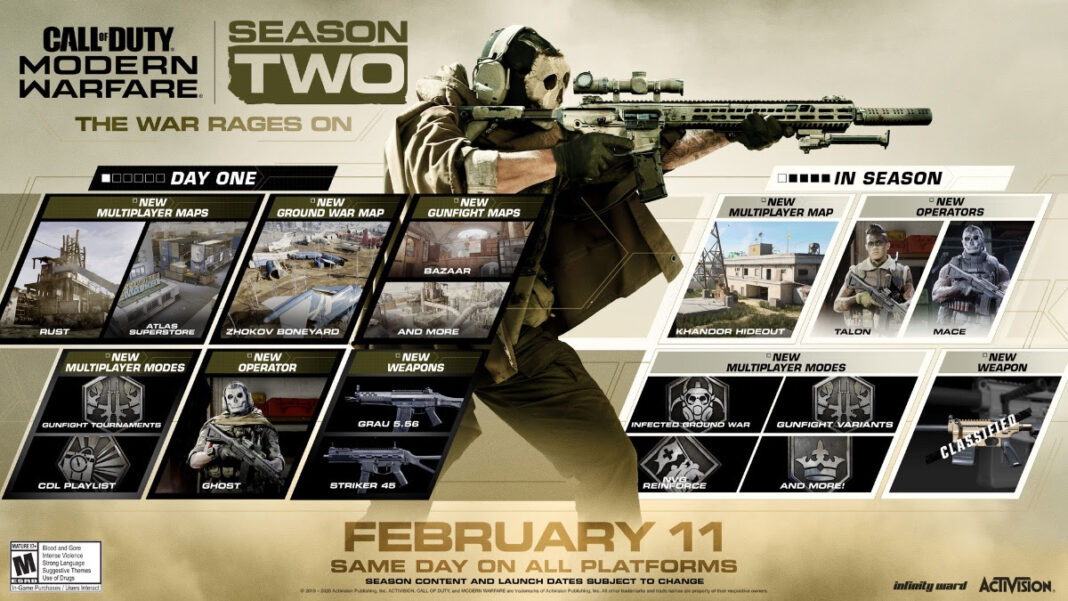 Call of Duty: Modern Warfare expands with new Season Two content today, jam packed with free multiplayer maps, modes and weapons available for all players. Throughout Season Two, players across all platforms can continue the fight alongside their favorite Operators in all-new and returning fan-favorite maps, fresh in-game challenges and rewards, limited-time game modes, and playlists among the community celebrations.

In addition, the Battle Pass system gets all brand new content, with Season Two starting today, as all players can unlock for free up to two new functional weapons, 300 COD points, calling cards and more just by playing. Those who want to bring their game to a whole new level with over 170 earnable items can also purchase the Season Two Battle Pass for 1,000 Call of Duty Points for access to unlock up to 100 tiers of new content.

“The community response to Modern Warfare since launch has been incredible and we’re thrilled to bring back some legendary fan-favorite maps and an iconic beloved Modern Warfare character Ghost. We’re committed to continuously fueling the fun with more and more content for everyone and can’t wait for players to experience what’s to come with Season Two”,said Patrick Kelly, Co-Studio Head and Creative Director, Infinity Ward.

Picking up from where the story left off previously, in Season Two Coalition and Allegiance forces must put their differences aside to work together in averting a catastrophic nuclear disaster and find out where Al-Qatala has taken a Soviet nuclear warhead. Season Two features a steady stream of fresh new Modern Warfare content for all players, with additional content and new playlists to be released weekly.

Players that own the Season Two Battle Pass will be instantly rewarded with an unlock for iconic and fan-favorite Special Forces Operator Simon “Ghost” Riley, playable across all Multiplayer and Special Ops modes, along with access to even more Weapon Blueprints, XP tokens, Operator Skins, challenges and watches. Plus, players who reach tier 100 will have unlocked a total of 1,300 COD points that can be used to pick up even more cool content in the Store.

The Battle Pass Bundle, which includes 20 Tier skips to immediately unlock new equipment and accelerate progress, is also available for those who want access to the same earnable content.

In addition to the Battle Pass, throughout Season Two players can also acquire even more content from the Modern Warfare Store, including two new Operators, all new Call of Duty League customization items, Blueprints, Operator skins, and more through various Store bundles. For the most up to date information on Call of Duty: Modern Warfare, check out the Activision Games Blog at https://blog.activision.com/call-of-duty