The CS:GO Season Six Finals in Odense, Denmark marked the end of another year full of esports action, as the top twelve teams from Europe and North America battled for a lion’s share of the US $1 million prize pool on December 5-10. The five day long competition concluded on Sunday with the Grand Finale, where the world’s best teams, the Brazilians SK Gaming, and European powerhouse FaZe Clan, provided the fully packed crowd with a memorable match. At the end, it was SK Gaming who took the prestigious trophy home and secured their second win counting towards the Intel® Grand Slam series.
The sold out Sparekassen Fyn Arena in Odense welcomed more than 5,000 fans on each of the three main event days, and will go down the history books as the fastest selling CS:GO Pro League Finals event of all time. The Finals reached some record-breaking viewership numbers with a digital peak of over 388,000 concurrent online viewers (excluding China), marking a 95% growth compared to the Season Five Finals that took place last June in Dallas, and a new all-time record for Pro League. More than four million hours of content have been consumed through 27 live streams in 18 languages and eight linear TV broadcasts, a 34% increase from the previous Pro League Season Finals. Throughout the tournament, 110 million social media impressions have been generated on Facebook, Twitter and Instagram alone.
“We are very happy about such a successful debut of the CS:GO Pro League Finals in Denmark,” said Ulrich Schulze Senior Vice President of Product at ESL. “The atmosphere in the sold out Sparekassen Fyn Arena in Odense was incredible, and the Danish crowd definitely lived up to everyones expectations. It was a great event to wrap up the year and we are looking forward to even more excitement in 2018.”
“Congratulations to SK Gaming on both their Pro League win and second win toward the Intel Grand Slam series, as well as the other extremely talented participating teams that help make Pro League the world’s best league for CS:GO,” said Ken Hershman, Executive Chairman and Commissioner, WESA. “We are very pleased with the turnout in attendance and viewership for this season’s finals, and we are looking forward to what next season brings.“
In addition to the CS:GO Pro League Finals, fans could explore the brand new gaming expo ODINCON featuring 5,000 square meters of exhibition space. ODINCON offered a variety of side activities including LAN area, public viewing for fans who were not able to secure a ticket for the Pro League Finals, partner and sponsor giveaways, meet and greets with influencers and signing sessions with teams and talents. 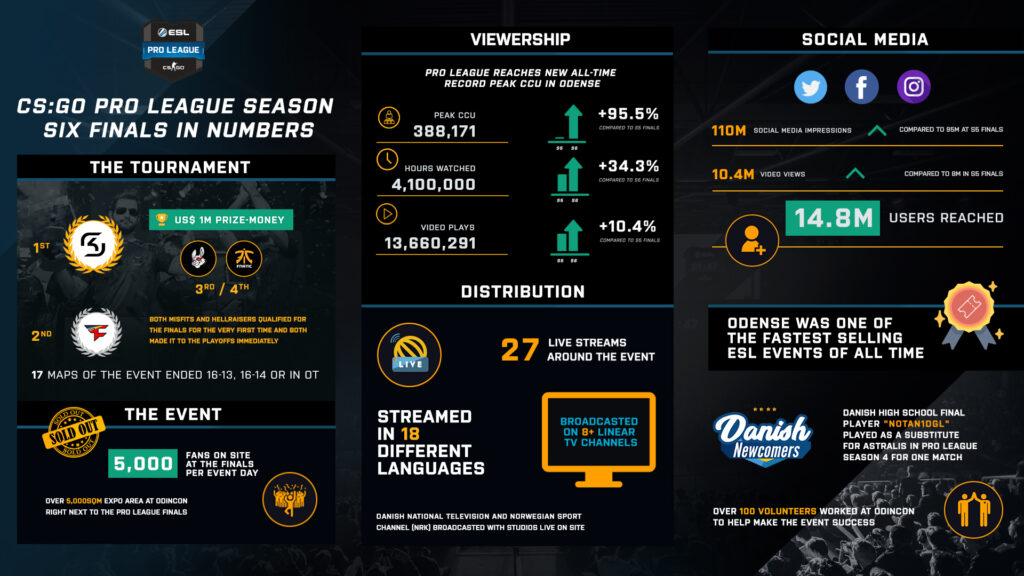 Unrailed! er ude til Xbox One