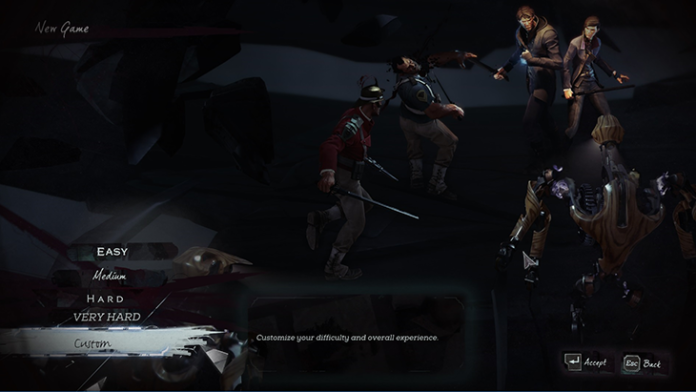 Executing the perfect playthrough in Dishonored 2 is tough enough. Whether you’re going for Clean Hands with Corvo, Ghosting through Karnaca as Emily – or any other permutation – Dishonored 2 will put you to the test. Now, with Game Update 2 (available for free starting next week) , you’ll have even more ways to increase the challenge, improve your odds of success and even replay a mission to try a different tack.

Available first on PC as a Steam Beta on January 18 and released in full on Xbox One, PlayStation 4 and PC on January 23, Game Update 2 comes with two major additions: additional Custom Difficulty settings and Mission Restart/Select.

With the Custom Difficulty settings, you can further tailor your experience. Let’s say you’re a stealth player who likes to carefully explore every option… now you can move a slider that adjusts how effective you are leaning from behind a barrier when skulking around. With more than 20 different sliders, these Custom Difficulty settings let you fiddle with everything from how quickly Sleep Darts take effect to how many active enemies are likely to attack you at once.

Also included in the Custom Difficulty settings is a special slider for those seeking the ultimate challenge. Toggle on Iron Mode when starting a new game, and you’ll not only deal with permadeath but also won’t be able to manually save or load. “Iron Mode adds even more teeth to Dishonored 2,” says Lead Designer Dinga Bakaba. “You will have to live with the consequences of your actions, or die permanently because of them.”

Once you download Game Update 2, you’ll also be able to replay any mission you unlock after the update is installed – giving you a better shot at nailing that Ghost or Clean Hands run. Note: these selectable missions will retain the status of your playthrough at the start of that mission (character, chaos, runes, money, choices, etc).

Game Update 2 also includes other new and improved features based on player feedback. Check back soon for detailed notes.