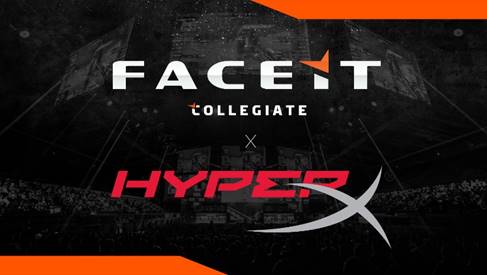 FACEIT, the world’s leading platform for competitive online gaming is pleased to reveal HyperX, the division of Kingston Technology Company, Inc., as the first official sponsor for FACEIT Collegiate Leagues. The partnership will span the recently revealed FACEIT collegiate programs for Counter Strike: Global Offensive, League of Legends and VALORANT with a combined prize pool of $55K. Together, FACEIT and HyperX will work together to support college esports clubs, providing funding and prizing for intramural events and programs.

The FACEIT Collegiate Leagues across CS:GO, League of Legends, and VALORANT, will start this spring, offering competitive opportunities for collegiate players of all levels. The partnership is the latest in a series of high-profile partnerships between FACEIT and HyperX including the FACEIT Global Summit: PUBG Classic, the Esports Championship Series (ECS), and the FACEIT London Major. As part of the partnership, HyperX and FACEIT will produce “HyperX Collegiate All Stars” which will see the top performing players competing in the leagues participate in several events in June 2021.

The CS:GO Premier League will boast a $25K prize pool for top tier collegiate players and $5K at the Contenders level which will follow a ten-week Swiss regular season, followed by a playoff bracket for the top teams. The League of Legends Invitational Series will see teams from across North America compete in State Invitationals where state and provincial winners move onto the Regional Invitationals to compete for $5,000 in prizes. Winners of each Regional Invitational will reach the epic conclusion at the FACEIT Collegiate Finals, playing for $10,000. The VALORANT Premiere League will also offer opportunities for top level collegiate players and a $10,000 prize, with a contender league for more casual fans of Riot Games’ ground-breaking new FPS.

Taking place in June 2021 to end the collegiate season, HyperX will sponsor the HyperX Collegiate All Stars. The unique event will invite the community to vote to determine the top players across the collegiate leagues, divided between East and West. The star players will be invited to perform in exhibition matches, skills challenges and other engaging events over a select weekend, giving the best players across the leagues another chance to showcase their first-class skillset.

“We are excited to announce our first partner as HyperX, a true global leader in gaming products who share our vision for the development of collegiate esports, and recognises the immense value of the student audience,” said Duran Parsi, Director of Collegiate Esports, FACEIT. “We have some fantastic activations planned such as HyperX Collegiate All Stars which will add a lot of value to our community, and we look forward to working together on the upcoming leagues.”

“We´re thrilled to be partnering with FACEIT on this fantastic opportunity. The shared goal between our brands allows projects like this to develop and support our community by inspiring all the gamers to achieve their best”, said Christopher Pankhurst, Influencer Marketing Specialist, HyperX EMEA. “We’re very proud to be sponsoring their teams and leagues, and we’re going to see a high level of competition in the events that will unfold in the coming months. HyperX and FACEIT will be there to bolster the collegiate players and their enthusiastic audience”.