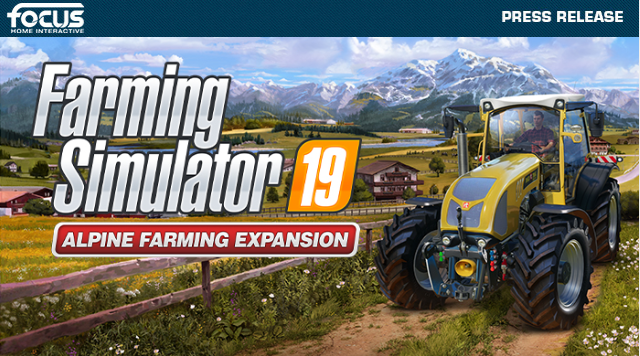 Farming Simulator 19: Get a glimpse of the new Alpine Farming Expansion map and vehicles!

Farming Simulator 19, the multi-million selling franchise from GIANTS Software and Focus Home Interactive,
celebrates another upcoming expansion: Alpine Farming. This expansion brings with it a new map, new brands, and new vehicles.
See it all in today’s brand new screenshots and prepare for release on November 12!

Alpine Farming expansion brings more than 30 new vehicles and pieces of farming equipment, faithfully reproduced in partnership with famous mountain-oriented farming brands.Learn to use machines such as the Aebi CC 66, the very first motor mower in the Farming Simulator franchise. Try the SIP FAVORIT 254 rake with its unique tedder for haymaking, or use tools from Austrian brand Pöttinger with a wide number of pieces of equipment. Take full advantage of the multifunctional LINDNER UNITRAC 122 LDRIVE vehicle, which you can easily combine with the STÖCKL MISTRAL 3400 SR for manure spreading, with the AGRAR ADF 3200 manure tank, or the LÜÖND SWISS-ELITE S31 loader.

Get a glimpse of three new tractors, each joining the huge garage of more than 475 machines of Farming Simulator 19. For the first time in the franchise’s history, drive the fully electric Rigitrac SKE 50.

Finally, there’s never been a better time to grab the ultimate version of Farming Simulator 19: Season 3 of the Farming Simulator League has just been announced! Get ready for the competition and a chance to win fantastic prizes!’