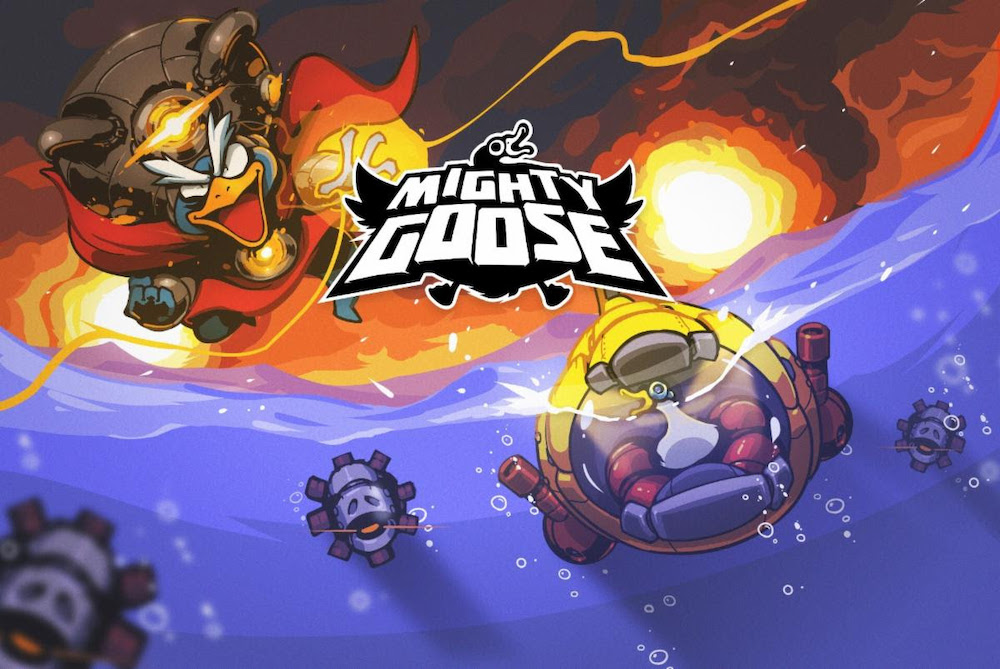 The waddling, weapon-toting bounty hunter, Mighty Goose, receives a distress call summoning them to the watery Planet Ceto, under attack by the villainous Evil Baron. Land amidst the brutal chaos reigning over the poor inhabitants of what was once a paradise and fight off hordes of enemies in this homage to classic side-scrolling arcade games.

Bring waves of destruction while riding a surfboard. Enter a new submarine-like aquatic assault vehicle, and turn sinister sea creatures into sushi. Then square off with the Baron for the fate of this planet once and for all — and to make sure Mighty Goose gets paid; intergalactic bounty hunting is not cheap.

Thankfully, this ferocious fowl comes fully loaded, as Mighty can use all the unlocked and upgraded abilities in this new world which unlocks after completing the campaign. Enjoy new pixel art from Richard Lems (KUNAI) and some banging new tracks from composer Dominic Ninmark (Blazing Chrome). Remember to bring a second controller and have a friend control Mighty’s companion!
“Bringing the team back together for this free DLC was a reminder of why Mighty Goose was such a dream project,” said Richard Lems, founder of Blastmode. “Regardless if you’re playing it for the 100th time or checking it out now with the DLC, thank you for making Mighty Goose such a success, and enjoy Planet Ceto!”

Mighty Goose’s free DLC is now available on Nintendo Switch, Steam for PC, Mac, and Linux; PlayStation 4 and 5; and Game Pass for PC, Xbox One, and Xbox Series X|S. Buy Mighty Goose on sale for 50% off the regular price of $19.99 until 25 April on Xbox, until 26 April on Steam, and until April 27 on Nintendo Switch (only in North America). Might Goose includes support for Japanese, English, French, German, Spanish, Italian, Dutch, Korean, Russian, Brazilian Portuguese, and Polish language text.
For more information, please visit the PLAYISM website,