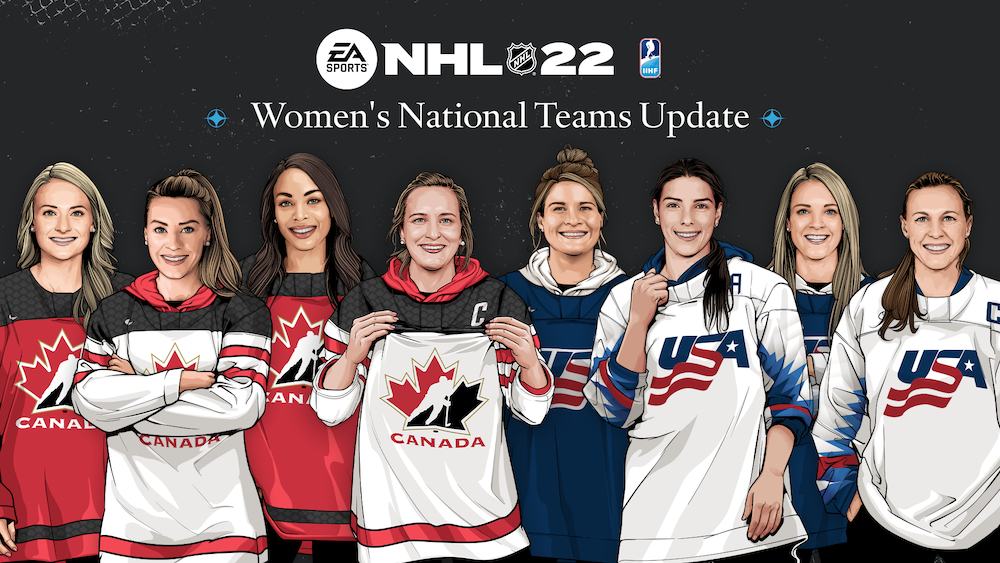 “It has been such a privilege to lace up my digital skates for the very first time in NHL 22, and to get to do so while playing for my country makes it all the more surreal,” said Team Canada captain Marie-Philip Poulin. “Representation matters, and I’m thrilled that every young girl who picks up a controller to play NHL 22 can feel like hockey is a sport for her, too.”

The IIHF Men’s World Championship is also now playable as part of this latest update. Sixteen international men’s teams and ten international women’s teams have been added to NHL 22, each of which is playable in a variety of game modes, including Play Now, Online VS, Threes Now and Shootout, along with their respective World Championship modes. The IIHF Men’s and Women’s teams follow the introduction of the prestigious IIHF World Junior Championship, which was added last month alongside various federations, logos and uniforms being available in Ultimate Team and World of Chel.

“The introduction of this latest IIHF content to NHL 22 continues the franchise’s evolution to reflect the growing diversity of its fanbase,” said Sean Ramjagsingh, VP and GM, EA SPORTS. “We’re so proud to showcase this stellar talent from around the world—and in particular, the women’s international teams—as they make their Chel debut.”

These updates arrive shortly after the debut on the latest episode of the five-part digital series Breaking Ice, a collaboration between EA SPORTS and UNINTERRUPTED Canada that profiles champions of diversity in hockey. The episode, which features members of the Canadian and U.S. Women’s National Teams discussing their work to create long-lasting and meaningful change in the world of sports, is viewable here.

For more information about this latest free update, please check out the patch notes here.