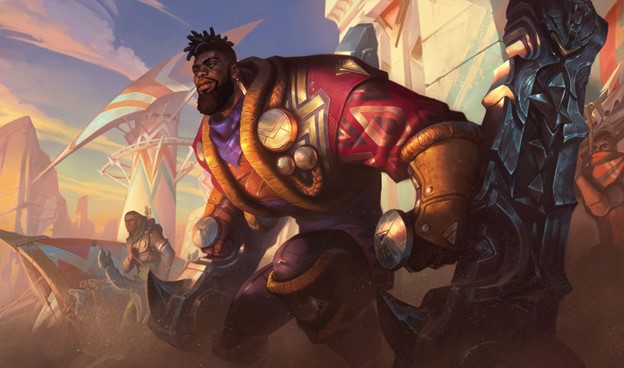 A mighty guardian wielding weapons forged from an apex predator he once slayed, K’Sante is a hero of his people, dominating fights with keen judgment and defiant fire. His weapons may appear defensive at first, but given the right moment, he can transform them into lethal blades, taking down giant foes others dare not approach. In game, K’Sante is a top, tank champion, focusing on saving allies from harm, before picking out the monstrous threat on the enemy team, defiantly smashing them through a wall to duel them.

“Even now, my people stand with me, my weapons aimed in their name.”

Defiant and courageous, K’Sante battles colossal beasts and ruthless Ascended to protect his home of Nazumah, a coveted oasis amid the sands of Shurima. But after a falling-out with his former partner, K’Sante realizes that in order to become a warrior worthy of leading his city, he must temper his single-minded drive for success. Only then can he avoid falling prey to his own pride and find the wisdom he needs to defeat the vicious monsters threatening his people. Previously announced as the President of League of Legends, Lil Nas X co-designed in collaboration with Riot Games the Prestige Edition of K’Sante’s launch skin, Empyrean K’Sante. Lil Nas X’s “Prestige Empyrean K’Sante” skin debuts today on PBE (Public Beta Environment) along with the champion and will be released on November 3 worldwide (unlockable until November 14). The in-game skin will not be available for direct purchase, but earnable through playing League of Legends or Teamfight Tactics games during the Worlds 2022 in-game event. Players will have to earn in-game currency (2,000 Worlds 2022 tokens) to permanently unlock the skin. Following Riot Games’ first in-game partnership with Louis Vuitton, Lil Nas X’s Prestige Skin is League’s first co-designed artist in-game collaboration, giving players an opportunity to celebrate this unforgettable partnership with a one-of-a-kind skin.