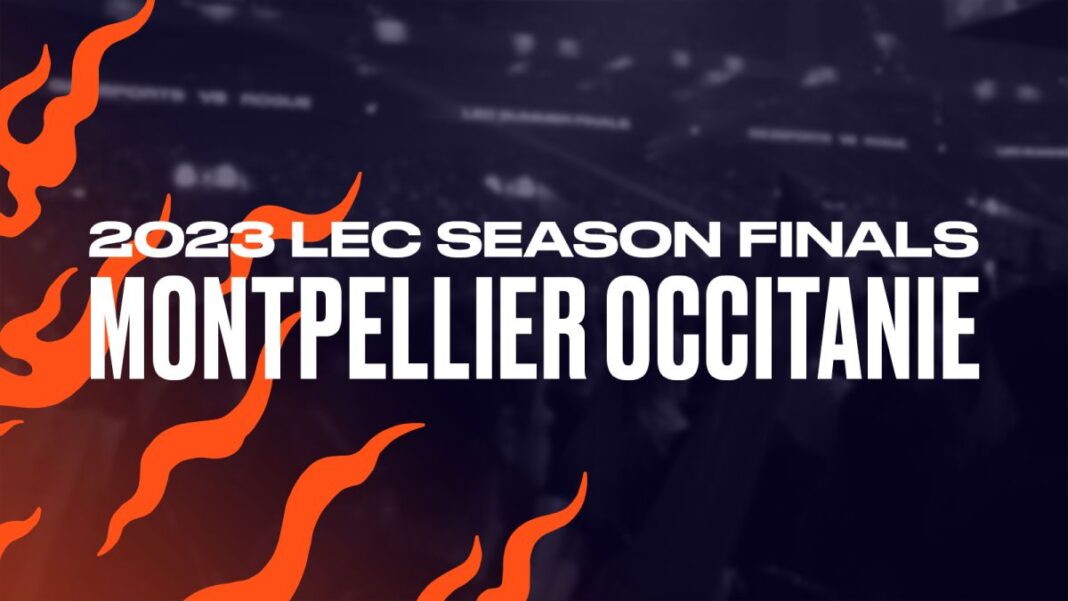 2023 may have only begun, but we’re already looking ahead to our end-of-season showpiece – the LEC Season Finals roadshow. This year, we wanted to give our community a sneak peak at what we have in store for our 2023 LEC Season Finals by revealing the location for the event earlier than ever before. We’re beyond thrilled to announce that we’ll be hosting our crown jewel event at the spectacular Sud de France Arena in Montpellier, in the Occitanie region!

After our amazing LEC 2022 Summer Finals experience in Malmö, Sweden, we can’t wait to get back on the road, and bring the live LEC experience to our fans in France and beyond. The French LoL Esports community is integral to our esport and regularly supports our players in the LEC by consistently tuning in to watch via our French LEC broadcast. The country’s fanbase are tireless supporters of the domestic league, the LFL (La Ligue Française), which has grown to become one of the top ERLs in our ecosystem. With such an engaged fanbase in France, we’re very excited to showcase the best EMEA LoL Esports talent to fans in the country!

“The LEC Season Finals is the biggest event in the Riot Esports EMEA calendar year and a celebration of the LEC season, providing LoL Esports fans with the opportunity to come together and watch EMEA’s best players make history,” said Alberto Guerrero, Head of Esports, EMEA at Riot Games. “With such a large and spirited LoL Esports fan base in France, we’re delighted to bring our roadshow back to the country for the first time since 2017, by hosting our showpiece event in Montpellier in the Occitanie region. The city and region were extremely impressive throughout the host city vetting process and their passion and commitment to growing the gaming and esports industries was very evident.”

“We are proud to host the 2023 LEC Season Finals in the Occitanie Region and in Montpellier Méditerranée Métropole. The monumental event brings together young people from all over EMEA and hosting the finals showcases our commitment to players in the video games industries. This event will contribute to the influence of our video game ecosystem and its community, among the most important in France and the region,” said Carole Delga, the President of the Occitanie Region and Michael Delafosse, Mayor of Montpellier and President of Montpellier Méditerranée Métropole, in a joint statement.

In recent years, the Occitanie Region and the Montpellier Metropolis have developed one of the best gaming ecosystems in EMEA and regularly hosts esports events to its community of gaming enthusiasts. Our 2023 host city is also where part of the “Arcane” production team Fortiche Production is based, showcasing the region’s love for our game. With its stunning medieval streets, beautiful architecture and variety of dining experiences, as well as its international airport links, high-speed train stations, and close proximity to many major cities, Montpellier and the Occitanie region offers an accessible location and range of activities for any travelling fans.

We can’t share anything more with you at this stage, but we can confirm we have LOTS more details, including ticketing information, roadshow dates and some super hype content to share with you in the coming months! Can KOI’s star-studded roster reign supreme under a new banner? Will G2 Esports make the run and win the title like they did back in Paris in 2017? Will Rekkles return to France and put on a show in front of his old home crowd? Or will Team Vitality put on a show and play in front of their own fans in their first ever finals? All these questions will be answered as we watch the action unfold throughout 2023!

Keep your eyes peeled for more information in the coming months on lolesports.com and be sure to follow us on Twitter for updates.