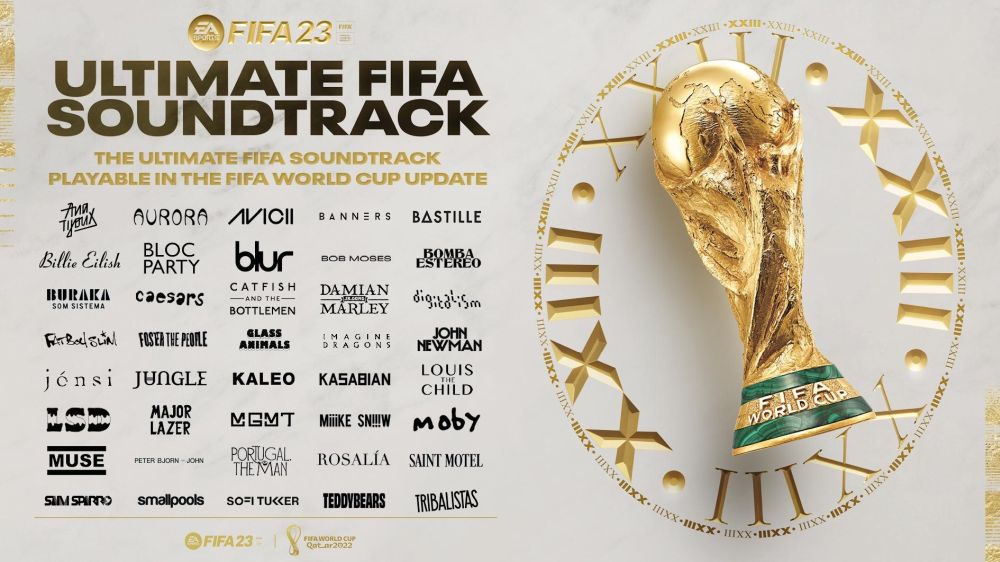 Today, Electronic Arts Inc. (NASDAQ: EA)  announced the Ultimate FIFA Soundtrack in collaboration with Spotify, following a week of nominations from fans across the globe. The Ultimate FIFA Soundtrack is reflective of the world’s game and consists of an unprecedented 100 songs from EA SPORTS FIFA titles over the last 25 years. Of the top 100 songs published on Spotify, 40 will return in-game in FIFA 23 alongside the launch of the FIFA World Cup™ update coming on November 9.

“For the past quarter century, EA SPORTS FIFA has been a destination for new music from up-and-coming artists and superstars alike. Every fan has their favorite FIFA tracks, and this playlist is the ultimate celebration of the music that has defined discovery, diversity, and excellence for generations of gamers,” said Steve Schnur, President, Music at EA. “Originally, FIFA soundtracks reflected global culture. Then they began to influence culture. The Ultimate FIFA Soundtrack proves how and why they’ve become culture.”

On November 2, EA SPORTS invited FIFA players across generations to nominate their favorite tunes. EA SPORTS collaborated with Spotify to make 1,000+ songs of the FIFA Soundtrack back catalog playable in one place, with the most popular songs by November 7 being chosen for this final list of 100 songs. Of this 100, the following 40 songs will also be added to in-game soundtrack alongside the November 9, 2022 FIFA World Cup™ update.

Here are some key stats* from Spotify around FIFA soundtracks past and present:

Additionally, fresh off their successful world tour, the BRIT and Grammy award winning virtual band Gorillaz joins forces with EA SPORTS FIFA for the release of a brand new track, ‘Baby Queen’, already available in FIFA 23. With the FIFA World Cup™ right around the corner, fans can also expect a custom Gorillaz kit to be revealed in FIFA Ultimate Team™ on November 17th.