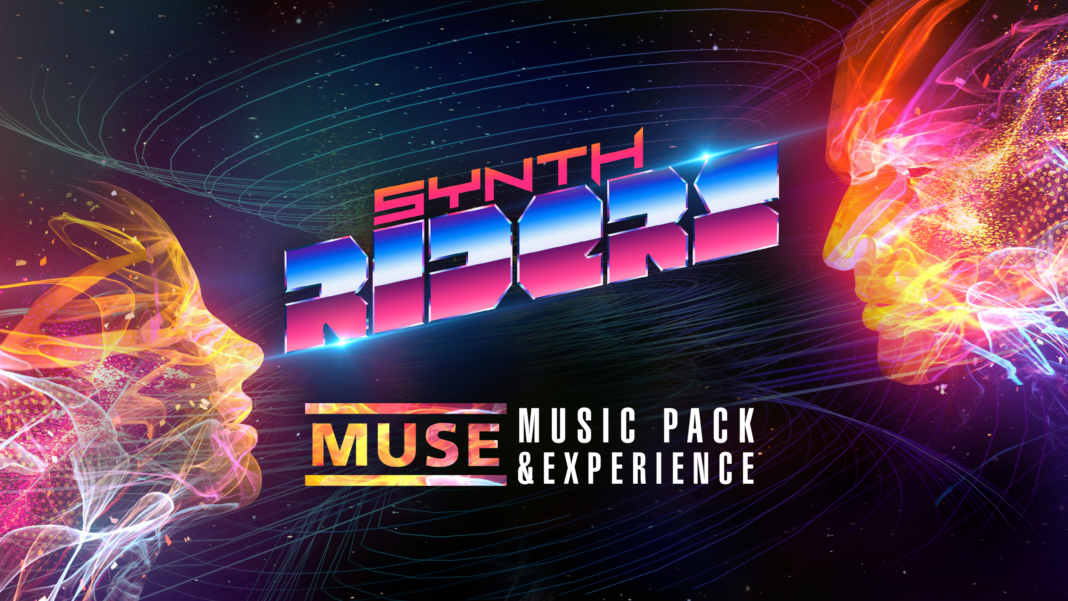 Synth Riders invites players to join Muse on an interstellar rock journey through the band’s greatest hits. Muse returns to this fan-favorite VR rhythm game with a dedicated 5-song pack, among which are best-selling tracks such as “Starlight”, “Uprising”, and “Madness”. The new collection is now available on Oculus Quest and Steam (with PSVR to follow in two weeks), featuring five paid DLC songs and a unique visual Experience for “Starlight”. The pack will also be included in a special physical edition on PlayStation VR, scheduled to release through Perp Games on 12th November.

“Muse Music Pack” is the sixth music bundle for Synth Riders, a VR rhythm game known for freestyle-dancing gameplay and unique visual Experiences. The new pack pays tribute to these incredible British electro-rockers, with five tracks, including their best-selling single of all time and spanning twelve years of their career. Influenced by electronic, progressive and glam rock, the band blends these styles into a truly distinctive Muse sound, topped by Matt Bellamy’s soaring vocals.

Following on from the previous experience for Muse’s “Algorithm”, the pack includes a brand new Synth Riders Experience, tailored for Muse’s massive hit “Starlight”. Players are invited to immerse themselves in the artistically driven visuals inspired by this epic intergalactic rock ballad, and let the game blend sight, sound and movement together into something truly unique.

“It’s incredibly inspiring to be able to work with Muse again. They are a perfect fit for Synth Riders because of their sound – when you ride the rails to match the vocals, the combination is electrifying and emotional. For the Experience, our creative interpretation of the song’s lyrics gave us the freedom to explore a whole galaxy of particles, abstract images, and even a black hole!”

Kluge Interactive, the developer of Synth Riders, is also proud to announce a partnership with Perp Games (a well-established publisher of Moss, Vader Immortal: A Star Wars VR Series, and more) to bring a physical version of the game to PlayStation VR, coming November 12th and bundled with the brand new “Muse Music Pack” and exciting extras.

“Synth Riders is one of the highest-rated PSVR games ever and absolutely loved by everyone who plays it. We are extremely excited that the Physical Edition will also contain this amazing new Muse Music Pack, providing fans of physical games with a very special box indeed.”

With the addition of the “Muse Music Pack” Synth Riders’ soundtrack now features 54 free and 30 DLC songs, all of them playable in Multiplayer on PCVR and Quest, and in a variety of difficulty levels and modes across the game. Oculus Quest owners who haven’t yet played the game can try it out for free in the demo available on App Lab, featuring 5 songs with all modifiers.
The “Muse Music Pack” launches today on Oculus Quest (cross-buy with Rift), Steam, and Viveport, followed by the PlayStation VR release scheduled for September 29th. All five tracks can be purchased individually for $1.99, or together as a bundle for $7.99 with a 20% discount.