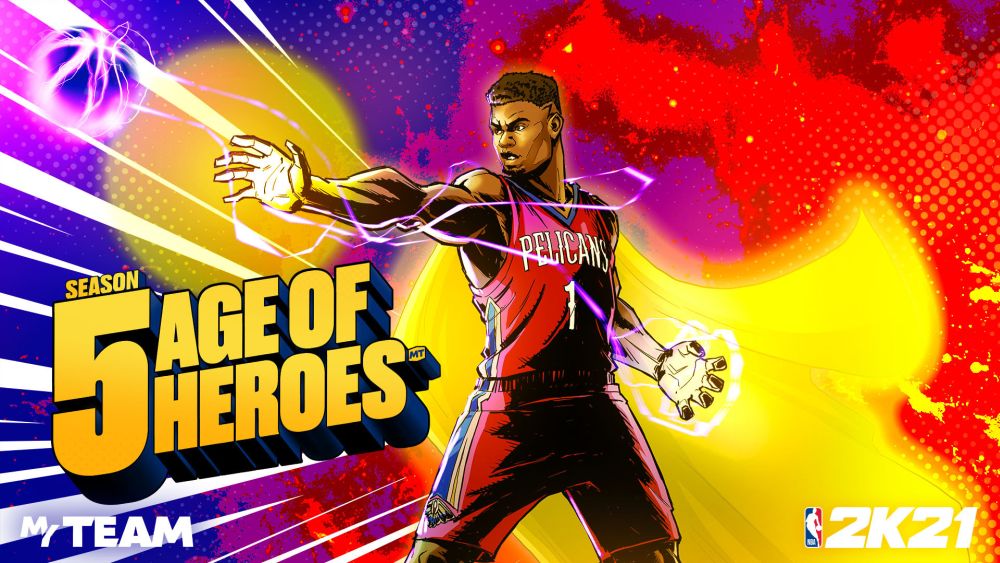 It’s an Age of Heroes in MyTEAM for Season 5! Over the upcoming weeks we will crown our third $250,000 MyTEAM Unlimited Tournament winner, experience NBA All-Star in MyTEAM, and see every lineup in the game get upgrades with new rewards and cards being added every week. No need to monologue to distract the hero, you! So let’s get to the details!

Whether it’s competitive lineups or theme teams, seeing the variety of historic and current players used in 13 player lineups is one of my favorite things to see shared by the MyTEAM community. For Season 5, we’re launching two new collections that will assemble Superhero versions of 15 Golden Age and 15 Modern Age players into an impressive interconnected mural. Trust me, these drawn cards are some of the most unique and biggest undertakings we’ve, well, undertaken! And yes, completing these collections will unlock a prize that is hitherto undreamt of in MyTEAM. Stay tuned for more info on those epic rewards as the season progresses and the cards are released.

Speaking of which, how will you collect all of the 30 players? If you head into the Season Menu you will see a mixture of released and Coming Soon Agenda Groups. These Coming Soon groups will be updated throughout the season with Agendas to complete that will reward you Superhero players. The rest will be released each Friday, starting off with formidable alter ego versions of Luka, Mitchell Robinson, Drazen Petrovic, and Big Shaq Diesel. In the Agenda Groups, tip-off the season with Superhero versions of the Iceman George Gervin, Manu Ginobili, and the gargantuan Tacko Fall.

Like previous seasons, the Season Level player rewards will unlock even more XP for you to earn. In Age of Heroes, the Level 1 reward LeBron James, an evolution card, will have weekly Agenda Groups that will unlock a Superhero card at the beginning and end of the season. What is unique about this evolution card? It is completely choice driven! All three evolution levels will let you choose how you want to build your own Diamond LeBron James.

As you know by now, all of that XP needs to be earned to rise up the Season Levels to reach the Season Grand Prize. For Season 5, reach Level 40 to earn Galaxy Opal David Robinson. This MVP, 2-time Champion, and 10-time All-Star will be a matchup nightmare for any big you go against.
Accompanying the Admiral and King James in the Season Rewards are players known for feats during the NBA All-Star Weekend, including Hamidou Diallo, Joe Harris, Buddy Hield, and Mark Price. Like I mentioned before, NBA All-Star is taking place during Season 5, and everyone who has played MyTEAM in previous years knows that we go BIG for All-Star. Throwing you another “stay tuned” for the details, but you will NOT want to miss what we have in store.

What I can reveal is the length of Season 5 is…. 5 weeks! One week shorter than the typical MyTEAM season in NBA 2K21. So we are overloading the XP from Agendas and reducing the win requirements needed to reach the Galaxy Opal Tier in Unlimited. This also means in Limited you will only need 5 rings to earn Galaxy Opal Pau Gasol, one less than our featured Signature Challenge player.

Six Rings, two three-peats, and 45 points for Michael Jordan to defeat the Jazz in the 1998 NBA Finals. For Age of Heroes, Michael Jordan’s Last Shot is our Signature Challenge. Complete the heroic win requirements to earn a Diamond Jordan shoe and a Hall of Fame badge to improve your lineup. You can use any MJ card to compete in this game, but if you need a Michael Jordan card, you can pick up the re-release of his Season of Giving card with the locker code JORDAN-LAST-SHOT. Oh, and if you feel like boosting this card to the next level, run him with his new Dynamic Duo, and fellow Bulls icon, Sapphire Derrick Rose; which you can pick up from The Exchange.


Also taking place this season is the grand finals of the $250,000 MyTEAM Unlimited Tournament. With $200,000 going the winner and $50,000 going to the runner-up, the stakes have been raised all year for this once-in-a-lifetime opportunity for two members of the MyTEAM community. We are counting down the days to March 6th, and be sure to watch it all go down on twitch.tv/nba2k as a third MyTEAM Champion is crowned!

As always, there are even more changes and additions to a new Season in MyTEAM, so here we go!

There is no time to waste! Jump into MyTEAM Season 5: Age of Heroes, build your super team, take on heroic challenges, and earn legendary rewards!