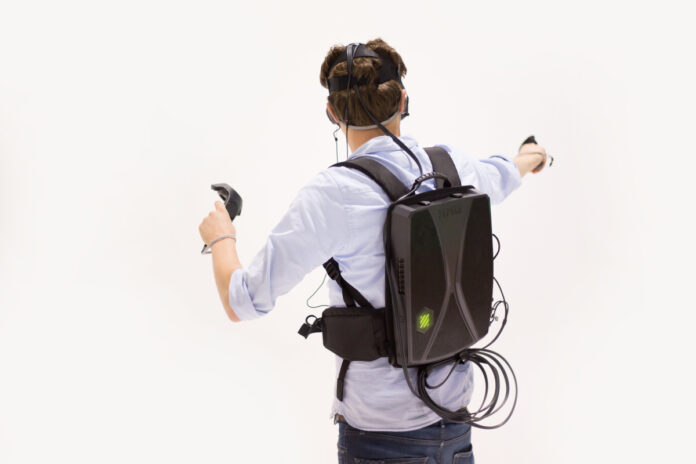 The HTC Vive is the most advanced VR headset on the market. It gives its users the possibility to move in a space of up to 5×5 meters. Until now the Vive requires a hardwired cable connection to a PC or laptop, which limits the user in several ways. The length of the cable, awareness that the user is tethered to a external device, tripping danger and possible damage to the connected PC/laptop are just some of the factors which limit the fully imersive virtual experience that the Vive is capable of delivering.

The XMG WALKER is a revolution in the VR experience. It can be worn comfortably on your back and it allows the user to fully immerse themselves in the virtual experience. The XMG Walker also opens up a multitude of new experiences, for example when used in open tracking arenas not limited to 5x5m, multiplayer VR games, for professional use in demonstrations and in applications that require greater freedom of movement. The XMG Walker not only multiplies the VR experience for existing applications but allows developers to realise the potential of expansive virtual reality environments.

High-end performance in a Comfortable Backpack

The XMG WALKER is equipped with two 99.36Wh batteries. Two additional batteries are also included with each XMG WALKER. Two batteries are required to provide maximum performance, however their hot-swappable feature enables an uninterrupted VR experience. A pair of batteries will power the XMG Walker for a minimum of 40 minutes and a maximum of 60 minutes. If required, the XMG Walker can also be powered by a standard notebook power adapter and used as a powerful desktop pc. The XMG Walker includes support for 32GB DDR4 memory, PCIe x4 M.2 SSD, USB 3.0, USB 3.1 Gen2 Type-C, HDMI, DisplayPort, Gigabit LAN and 802.11AC WiFi.

Transmission of the data signal to the HTC Vive via wireless is possible,

but only provides poor image quality and leads to delays which cause discomfort and nausea. There is currently no appropriate wireless

solution nor is one expected in the near future. Furthermore, the necessary 7 Gbit /s transmission speed can be achieved only in theory. In practice, this bandwidth cannot be provided by the wireless solutions available today. Although the use of compression reduces the required transfer rates, it still produces latencies and leads to poorer image quality.

The XMG WALKER Backpack PC for VR is now available at www.mysn.de and can be shipped Europe-wide. The configuration with NVIDIA GTX 1070, Intel Core i7-6700HQ, 16 GB DDR RAM, 250 GB SSD, two extra batteries and charging station as well as Windows 10 will cost € 4,799.00. An overview of the features can be found at: http://www.xmg.gg/xmg-walker/.