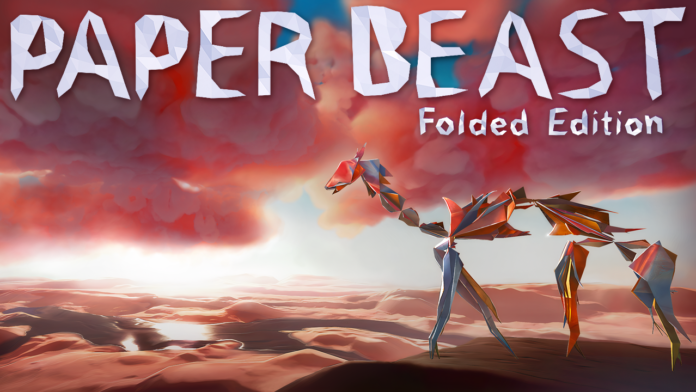 The game is based on this years VR hit Paper Beast and opens up the surprising adventure that features a fantastic game world, with a real-time ecosystem filled with bizarre creatures and wildlife, up to PC players (no VR headset required) with completely reworked from the ground up controls to provide the optimum experience on PC. Owners of the VR version will automatically receive access to the Folded Edition.

What critics said about PaperBeast VR

Paper Beast: Folded Edition invites you into a world of  fascinating and exotic creatures that live in a mysterious, living, breathing world that is fully alive with a real time ecosystem. Observe and interact to form delicate bonds with the Paper Beasts to learn the rules of the land (from physics-based rules to creature behaviour patterns), experiment and solve environmental puzzles. Save them from predators or natural dangers, shape the environment, and avoid digital storms on a journey through this new world, or create your own rules in sandbox mode.

About Eric Chahi
Éric Chahi is the legendary video game designer who helped shape the video game medium with his games Another World (1991), Heart of Darkness (1998) and From Dust (2011). Another World was a critical and commercial hit worldwide and has been ported to dozens of platforms, including current gen platforms, after its original Amiga and Atari ST release. One of the most influential games from the 90’s, Another World continues to inspire creators to this day.

About developer Pixel Reef
Founded by renowned game designer Eric Chahi (Another World, Heart of Darkness, From Dust), Pixel Reef aims to create immersive indie games with a poetic touch. The independent studio sees itself as an atoll, a happy place ripe for creative exploration.  More details can be found on the Pixel Reef website.