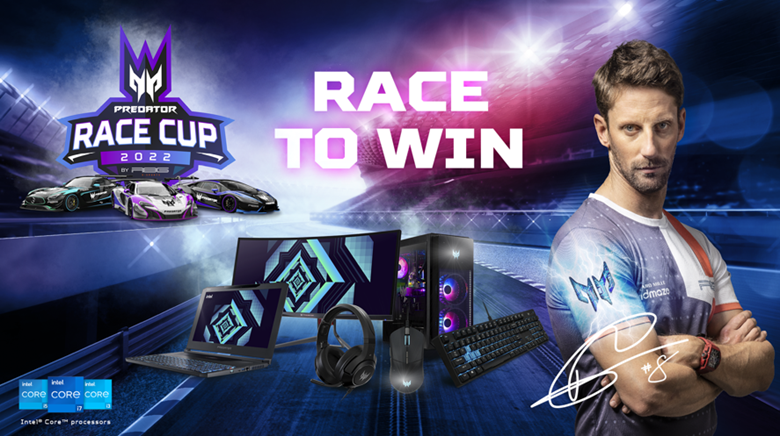 ·         Registration is free and open to anyone with a PC starting today April 20th 2022 in Denmark, Sweden and Norway

·         Total Value of up to €50,000  prize pool on offer, top two podium winners of national cup automatically enter international competition with chance to join R8G eSports, one of the top five global simracing teams, for one year

Acer today announced that registration for its Predator Race Cup 2022 is now open until May 12th 2022. Operated on the AssettoCorsa platform, participation is not limited purely to aspiring sim racers, but also fans of motor sports, gamers and enthusiasts.

Entry to the Nordic Predator Race Cup in Denmark, Sweden and Norway will be determined by a hot-lap qualifying. The top 26 drivers with the fastest laptime will compete in a 30 minutes Nordic final. The Nordic top two podium winners will be invited to the International Final on June 14th racing against other national podium winners from 24 countries. The champion of the International Final will win an exclusive “once in a lifetime” experience to join the R8G eSports team for one year as rookie and learn from the best.

“After the success of the first Predator Race Cup in 2021, we keep inventing our own eSports formats now and in the future. Partnering since 2020 with Romain Grosjean – a professional motorsport athlete, entrepreneur, founder of R8G eSports, and supporter of eSports – Acer continues to support the gaming community by developing new talent at a grassroot level,” said Hajo Blingen, Vice President, Acer EMEA Marketing. “With simracing primed for continued growth, we are extremely proud to continue working in close collaboration with the R8G eSports team and top retailers in multiple countries across the EMEA region.”

All drivers of the Nordic Predator Race Cup 2022 can choose among three prestigious cars: Mercedes AMG GT3, Lamborghini Huracan GT3 or the McLaren 650 GT3 racing on the 5.891-kilometre long Silverstone known for its ultra-fast sweeping corners and fast average speeds.

The Predator Race Cup 2022 in the Nordics will be streamed live on Twitch and Youtube featuring expert commentary by Fjallefar and Argaskånskamän guiding fans through the action. Further broadcast details of the International Final will be announced ahead of the event.

For more details on how to join and register please visit the Predator Race Cup 2022 page here.