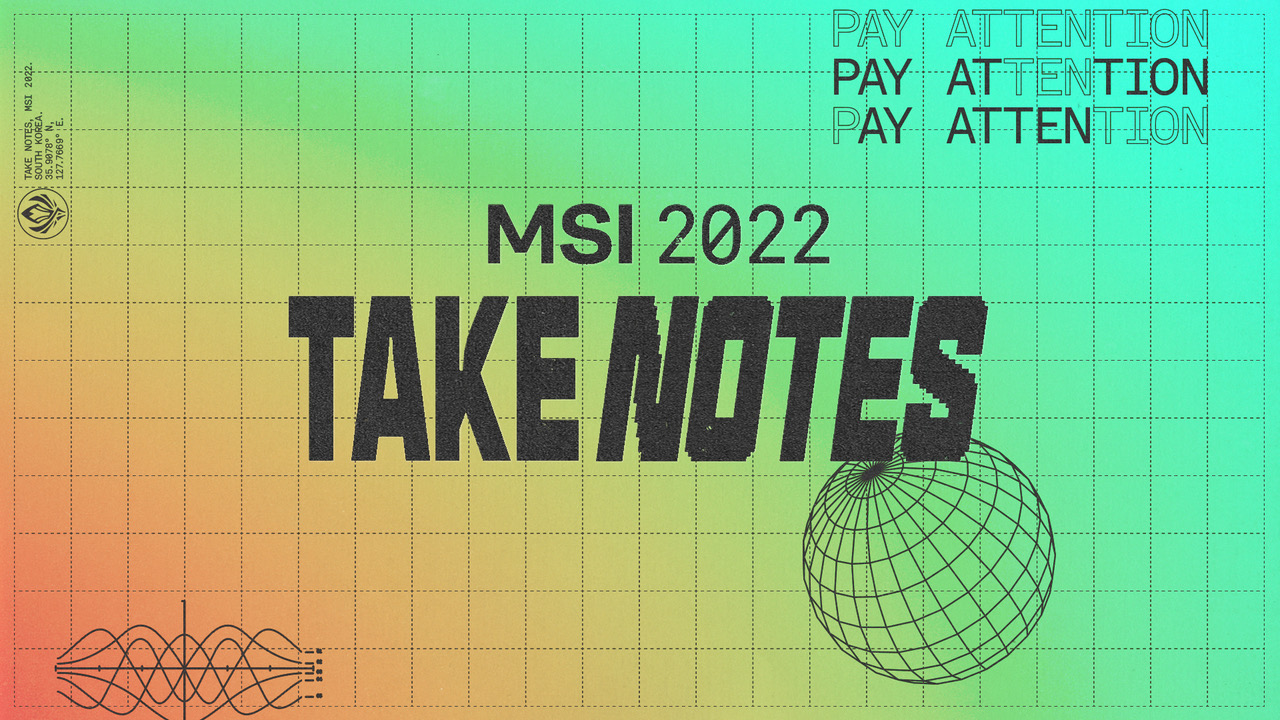 The 2022 League of Legends Mid-Season Invitational begins in a few short days! Here’s your one-stop shop for all things MSI.

What is the Mid-Season Invitational?The Mid-Season Invitational (MSI) is a foundational battleground in the annual LoL Esports season, where rising stars and teams make a global name for themselves. Held between the first and second splits of the season, the best team from the regional leagues compete for the title. MSI is a time for regions to showcase their bold and unique identities and foreshadows the work needed for pros looking to claim a World Championship title. Riot Games supervises regional leagues in North America, Europe, Latin America, Brazil, Oceania, Korea, Turkey, Russia, Vietnam, China, Japan, and Southeast Asia. The event moves between host regions each year; this year, teams will compete in Busan, South Korea.

This year’s creative theme, “TAKE NOTES,” is a confident, attitude-infused call to action that highlights the epic moves and original style of MSI’s greatest pros. It continues to build out MSI as the bolder, grittier  battleground of LoL Esports.

Where will MSI take place?The tournament will take place in Busan, South Korea, in two venues: the Busan Esports Arena (Groups) and the Bexco Exhibition Hall (Rumble and Knockouts). Busan is Korea’s second most populous city and is considered the home of esports – Busan hosted various stages of Worlds 2014 and Worlds 2018 previously. This is the first time MSI has traveled to Korea.What’s the format?GROUPS: Teams have been drawn into two groups of four and one group of three to play a best-of-one double round robin within their respective group during the Group Stage. The group of three will play a quadruple round robin.

RUMBLE: The top two teams from each of the three groups will advance to the Rumble Stage, where all six teams will play a best-of-one double round robin.

KNOCKOUTS: The final four teams standing will compete in the Knockout Stage utilizing a best-of-five single elimination format. The two remaining teams will compete on May 29 for the MSI Championship title.

Which teams are competing?This year, the teams competing from each of the different regions are:

CHINA – LPLRoyal Never Give Up (RNG)

Virtual: You can catch every match on lolesports.com.