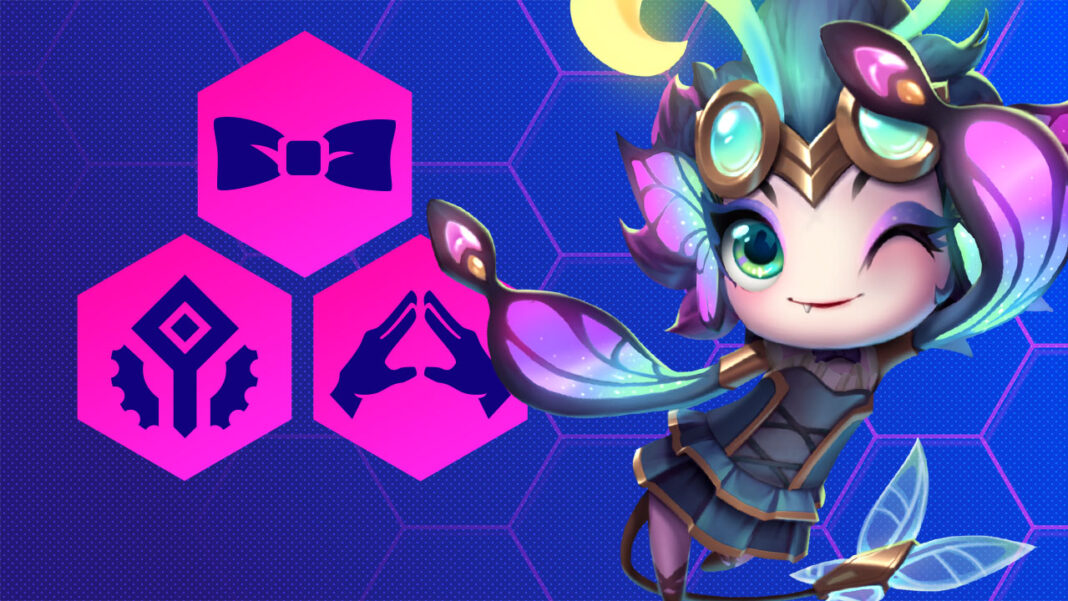 TFT Gizmos & Gadgets’ Neon Nights mid-set update will feature more than 20 new units, three new champion traits, 80 new augments. It will also include a new pass, Little Legends, arenas and Project Abyssia as a new mythic Little Legend. On top of all of that, Silco from Arcane will be coming to add more than just his unstable concoction to the mix. The Mid-set will hit PBE test servers on February first and live servers on February 16th with patch 12.4.

Hextech
Welcome to our Hextech dream, where every few seconds the Hexcore pulses with Hextech energy, granting allied Hextech units a shield for a few seconds. While Hextech units bear this shield, their attacks gain magic damage on hit.
Debonair
A trait that pulls together party-goers from across the Convergence, these soiree attendees know that there can only be one life of the party: the VIP.
Striker
Simple, yet striking, Strikers gain bonus attack damage to hit harder, and harder, and harder—turning Striker Emblems into gigantic Best Friend Swords to play with!
Socialite
With two new Socialites, the spotlight is sure to shine brighter! Socialite will still give bonus damage at (1), bonus mana regeneration at (2), and omnivamp at (3), but at (5) Socialite, all these bonuses will be DOUBLED!
Senna’s the new Socialite that turns pain into gain. Senna fires Piercing Darkness, which deals damage to all enemies in the direction of her target. For each enemy hit, she’ll heal the lowest health ally for a portion of the initial damage, plus a flat amount.
Rival
No longer just Sisters, Jinx and Vi have been pulled into the Convergence at an all new time in their careers—as Champions of Piltover and Zaun. For Vi, this means a new ability to show off her charming personality, and gauntlets.
Jinx still has her cliffhanger worthy ability, Super Mega Death Rocket, but with the updated trait, Rival, you’ll want to run either Jinx or Vi, as the two sisters can no longer work well together.
Augments, Augmented
In addition to our biggest mid-set roster swap to date, Neon Nights brings over 80 new Hextech Augments, the Edge of Night item, and a few other fun new gadgets.
Neon Nights comes with new gadgets and gizmos aplenty. Augments allow players to insert a ton of variety and decision making in each game.
New Item: Edge of Night
With the mid-set we’re swapping out Guardian Angel with Edge of Night, a brand new anti-burst item.
With Edge of Night, players maintain the powerful aggro drop, but give it a clear visual power in the form of a stealth that also sheds debuffs and afterwards grants an additional boon of attack speed.
Scouting your Future and your History
Last, and arguably most impactful, comes two experience changes that we will be implementing with the mid-set. First up, the Scouting Opponent Hint System!
There’s a lot to do in TFT, and keeping track of what opponents you’ve fought recently to know who you are more likely to fight next is just one more thing.
So, with the introduction of Neon Nights, and Augments like Future Sight that utilize opponent tracking, we pulled the trigger. We’re working on a matchup tracker that will help you get a sense of your next opponent. And while we see this as a necessary improvement to our UI, we want to make sure it’s done right—so expect this to launch a bit after our initial mid-set’s release.
We’re also updating our end of game match history to show Augments that players have chosen, and allow more units to be displayed for cases where players have a couple Tactician’s Crowns from a Mercenary cashout. Players can now scroll through their match history and  examine their choices.
PROJECT Abyssia: New Mythic!
We’ve got a new Mythic Little Legend stealing the show during Neon Nights. PROJECT Abyssia is here to flaunt their new tech, and maybe “borrow” some more.
Little Legends Glowed Up for the Glow-down
The Little Legends of Neon Nights herald in a bright future to the fleeting light of tonight.
Gizmos & Gadgets Pass II
The Gizmos & Gadgets Pass II is your ticket to explore all the new bits and bots Neon Nights has to offer. Just like any other pass, players will play games and complete missions to further your progress and earn free rewards like emotes and Little Legend eggs.
Flex Check at the Hextech Battle Arena
In addition to the Pass+ arenas, Neon Nights takes players to the place where Choncc and Pengu are destined to put their battle bots to the test. The Hextech Battle Arena is a futuristic esports arena that casts your games with it’s over 97 unique lines that respond to your actions.