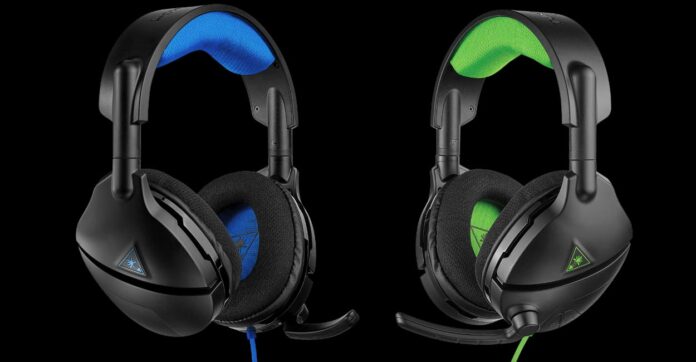 Leading gaming headset and audio accessory brand Turtle Beach (NASDAQ: HEAR), announced the latest product in its award-winning lineup of gaming headsets, the Stealth 300, is now available at participating retailers in the Nordic countries. Well-suited for the explosive growth of the Battle Royale genre, where a gaming headset is a must-have accessory – the Stealth 300 delivers the high-quality game audio, crystal-clear chat, and comfort and durability gamers demand on their path to a Victory Royale or Chicken Dinner, as they ascend the leaderboards. The Stealth 300 features powerful amplified audio to completely immerse players in their game, glasses friendly memory foam ear cushion, 40 hour battery, a metal-reinforced headband for added comfort and durability, and a suite of additional features that combine to deliver a true competitive advantage. The Stealth 300 is available for Xbox One and PlayStation®4 for a MSRP of $79.95, and also works with Nintendo Switch™ and mobile devices with a standard 3.5mm headset jack.

“The Battle Royale phenomenon continues to emerge and fuel the gaming community, and the Stealth 300 is ‘Built to Win’ for all gamers who drop onto a map,” said Juergen Stark, CEO, Turtle Beach.  “Whether you’re playing popular genre titles such as Fortnite or PUBG, or getting ready for this fall’s big AAA releases like Call of Duty: Black Ops 4 and Red Dead Redemption 2, the Stealth 300 delivers the superior audio, comfort, and durability you need to win, and at a price that doesn’t break the bank.”

Full Stealth 300 Details
The Stealth 300 incorporates many key features from this year’s top-selling headset in North America*, the Stealth 600, offering a superior new option for gamers looking to level-up their gameplay experience with a wired headset. The Stealth 300 for Xbox One and PS4™ features battery-powered amplification with a 40-hour rechargeable battery, large 50mm over-ear speakers and a high-sensitivity flip-to-mute mic for amazing game sound and crystal-clear chat. The Stealth 300 also has a metal-reinforced headband and includes Turtle Beach’s unique ProSpecs™ glasses friendly memory foam ear cushions, along with four EQ Audio Presets including Bass Boost, and Variable Mic Monitoring. Additionally, the Stealth 300 for Xbox One is optimized to deliver Microsoft’s Windows Sonic for Headphones surround sound to further immerse players in their games, movies, and music.