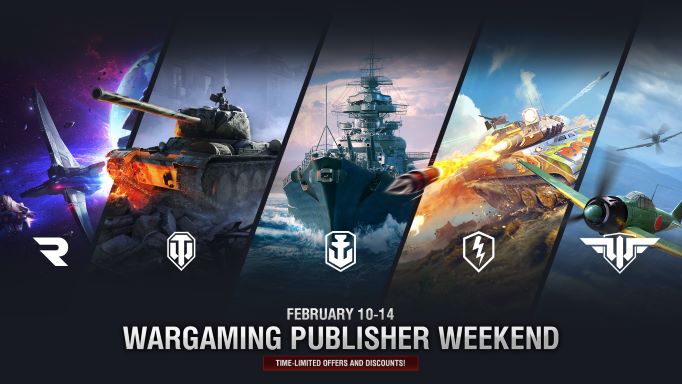 With a whole host of titles on the Steam platform, Wargaming is proud to announce its premier Steam Publisher Weekend. Running from 10th until 14th February, the event features huge discounts, free goodies, streams, and in-game and community-related activities. Taking center-stage is an exclusive bundle that includes useful in-game items for World of Tanks, World of Warships, World of Tanks Blitz and World of Warplanes at a staggering 95% discount, making it the best time to jump into any of these titles.

Let’s start with a collection of Wargaming legacy titles will be available at an 85% discount. These games include the original Master the Orion trilogy, Master of Orion: Conquer the Stars, Total Annihilation and both Massive Assault titles.

World of Tanks players can claim a special free bundle which includes a French wheeled light tank, a 100% trained crew, 3 days of World of Tanks Premium Account and a Garage slot. As well as this great freebie, exclusive to the Steam Publisher Weekend, is the Ruthless Champion DLC. This bundle features the Tier VI Soviet Object 244, unique 2D styles, Master of Orion-inspired inscriptions, and a collection of valuable and handy in-game items. Plus, using the invite code GOWOTSTEAM, new players can get a Premium tank, rentals of the Tier VII SU-122-44 tank destroyer and the Tier VI T-34-85M medium tank, credits, days of WoT Premium Account and more!

World of Warships’ seafaring captains won’t feel left out either! All players can grab free DLC that includes 3 days of Premium Account, 1 Steam container and 3 Steam camouflages. As well as this, a brand-new “Starter Pack” will be made available with a 25% discount, but captains don’t need to be new to the game to pick it up. This DLC contains the HMS Dreadnought, the USS Charleston, 3 days of Premium Account and 15 Steam camouflages. Additionally, a community event is set to be launched that will give all participants community tokens, as well as a chance of winning Tier VIII ships!

All World of Tanks Blitz players will be able to bolster their credit reserves and enjoy extra days of Premium and an avatar with the Steam Pack, which is available completely for free. And to celebrate the launch of the Big Boss mode (which is available until February 13th), a brand-new piece of DLC is available just for this weekend. This DLC contains the M6A2E1 EXP (a Tier VIII American heavy tank), the Plasma camo, a month of Premium, the Emoji light attachment, x5 XP certificates and other goodies which will prove valuable when taking on the new mode. The best part: it’s available at a stunning 70% off!

And finally, every one of World of Warplanes’ flying aces can get themselves a special bundle that includes the Polikarpov I-5 ShKAS, days of Premium Account, silver and steel trophies, and more, all for free! So, what better time to take to the skies and experience a whole ‘nother level of warfare.

So, no matter the preferred vehicle, whether it’s a tank, ship, plane or spacecraft, the thrill of victory awaits. All the offers listed above will only be available on Steam.