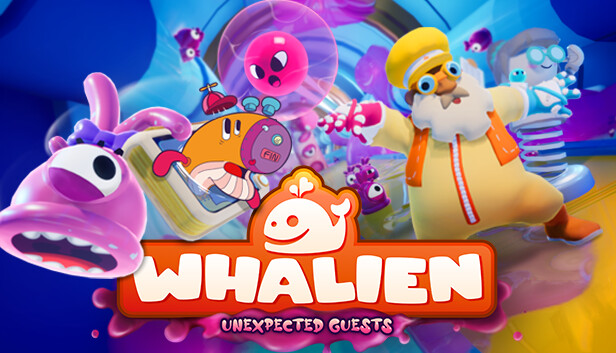 Austrian-based developer Forbidden Folds today officially announced WHALIEN – Unexpected Guests for PC, a unique third person puzzle adventure set on a mechanical whale! As part of the announcement, the company also revealed that a free demo of the game is now available for download as part of the highly anticipated Steam Next Fest event.

Fin, the mechanical whale, is the home of Ernest Hemingwhale. In fact, Ernest is Fin’s sole remaining inhabitant and as such is tasked with keeping him safe and running smoothly. When mysterious and dangerous Squiddies begin taking over Fin’s body, it’s up to Ernest to take down the slimy threats. Ernest must use both his wits and special gloves and pearls, appropriately named Mr. Push and Mrs. Pull, to manipulate objects in the environment, solve puzzles, and send the Squiddies packing. Through unique vibrant and colorful environments, delve deeper into the inner workings of Fin, meet loveable characters, and help protect not only Ernest’s home but also his friend.

To celebrate the kick-off of Steam Next Fest, Forbidden Folds has released a game demo for WHALIEN – Unexpected Guests, which can be downloaded at: https://store.steampowered.com/app/1270680/WHALIEN__Unexpected_Guests/