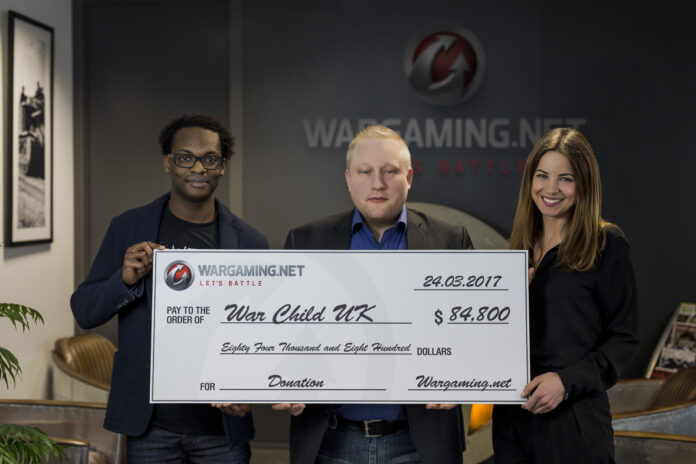 Late last year, Wargaming partnered with War Child for their Armistice Campaign. Players of World of Tanks were able to buy special emblems and packages to help raise money for children affected by conflict all over the world, with 100% of Wargaming’s share going directly to charity. Thanks to the community’s help and generosity, a donation of $84,800 went to War Child UK.

Wargaming would like to thank all the players who donated to this great cause as every single penny raised was from the community.

War Child is an organisation committed to supporting children who have had their lives torn apart by war, something no child should have to experience. They remain the only specialist charity supporting children affected by conflict and Wargaming are proud to have partnered with War Child on several initiatives over the past four years.

“As a retired soldier I have witnessed first-hand the remarkable and invaluable work that War Child do in areas affected by conflict. I am extremely proud of both Wargaming and our fabulous community for supporting this incredible and invaluable charity”, said Richard Cutland, Head of Military Relations at Wargaming.

“The relief and support War Child is providing to the weakest and most vulnerable victims of war – our children – has been truly inspirational for everyone at Wargaming. Through our support of museums we are striving to help preserve the memory and knowledge about armoured warfare and to raise awareness for the reality that real war is not a game. It is very humbling for us to see just how supportive of War Child’s immensely important work our community is and it is an honour for us to make this contribution in their name today”, added Markus Schill, General Manager Europe at Wargaming.

Wayne Emanuel, Gaming Development Manager at War Child, says: “At War Child we’re really overwhelmed by the generosity of the studios that took part. We’d also like to thank all the players who downloaded content or showed their support. War Child relies on support of partners like those who took part in Armistice to be able to provide our crucial work.  We are already excited about the next Armistice where we hope we can build on this year’s fantastic efforts and raise even more!”

And remember—you can still donate to War Child, so if you haven’t had chance to join the Armistice, there is still time!