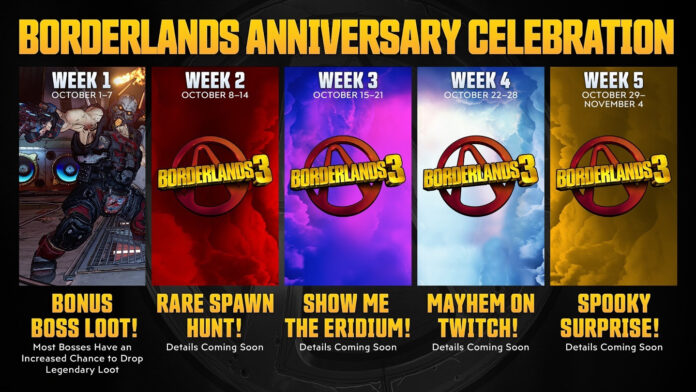 This month, it will have been 10 years since the original Borderlands debuted on October 20, 2009, and we’re showing our appreciation for a full decade of support with a five-week Borderlands Anniversary Celebration. For the entire month of October (and a little bit of November), Borderlands 3 Vault Hunters of all levels can score extra in-game loot and bonuses.

Each of the next five weeks will feature its very own theme in Borderlands 3, encouraging different in-game activities to maximize your rewards. As of Tuesday, October 1 at 18:00, Boss Week is live and will remain active until October 8 at 16:59 BST / 17:59 CEST, when the following week’s theme will begin. During Boss Week, certain bosses will have an increased chance to drop specific Legendary items. For a full boss-by-boss breakdown of Legendary loot drops, check out this blog.