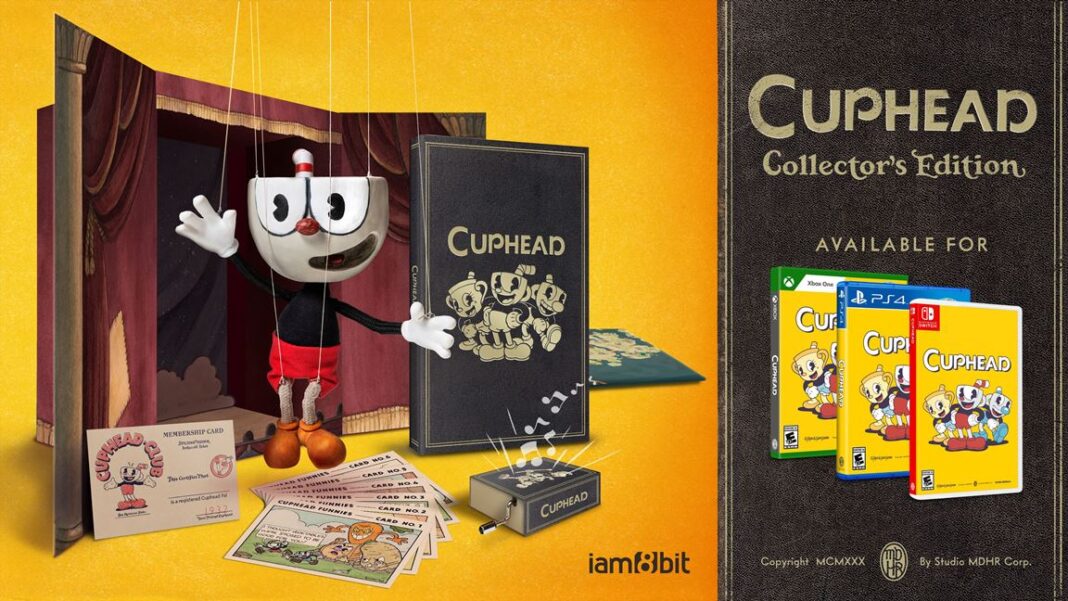 Studio MDHR and publisher iam8bit, with distribution by Skybound Games, have released a fantastical new trailer detailing the physical and Collector’s Editions of the hit action platformer Cuphead. The exclusive iam8bit Collector’s Edition is available to pre-order only at iam8bit.com. Fans can expect the retail physical version to launch on December 6 while the Collector’s Edition will be available at a later date.

“A physical edition of Cuphead is something we’ve been excited about for a very long time,” said Maja Moldenhauer, director, Studio MDHR. “A big part of the nostalgia that fuelled the design of Cuphead centers around the wonderful, tactile experience of getting that game you love off the shelf, opening the case, and diving into a new challenge or grand adventure. There’s nothing quite like it, and we couldn’t be more thrilled with the teams at iam8bit and Skybound for helping us bring Cuphead into players’ hands with the same meticulous care and craftsmanship that underpins how we made the game itself. In a year full of so much excitement here at Studio MDHR, I truly can’t think of a better way to round things out than with this release.”

Studio MDHR and iam8bit have collaborated to create the ultimate Collector’s Edition for any Cuphead fan. This includes all of the aforementioned items in addition to the following premium collectibles: a vintage handcrafted Cuphead marionette puppet, a mechanical hand-crank music box, a unique and classy o-sleeve, and a map showcasing the world of Inkwell Isles from Cuphead – all within a premium box showcasing the Asbestos Safety Curtain that can be transformed to display the Cuphead marionette.

Fans can also pre-order a new double 2xLP vinyl today, featuring old timey tunes from The Delicious Last Course DLC expansion by composer Kristofer Maddigan. The vinyl includes a special foldout poster with art by Shawn Dickinson, as well as three recipe cards containing MDHR family recipes. That’s not all though, as fans who missed out on the original Cuphead vinyl release can expect a reprint going live soon on iam8bit.com.