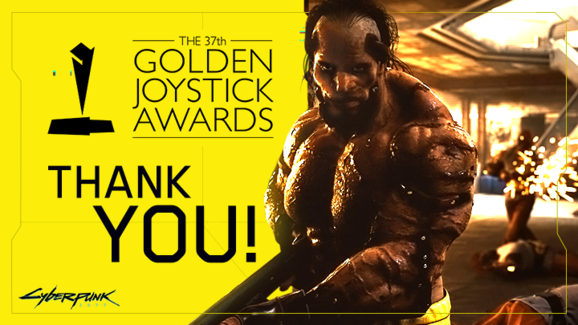 CD PROJEKT RED announces Cyberpunk 2077 has been named the Most Wanted Game at the 37th Golden Joysticks Awards. This is the second year in a row gamers voted the studio’s upcoming open-world RPG their Most Wanted Game.

Prior to the announcement, during the award gala’s pre-show segment, a special video from the Golden Joystick team’s visit to CD PROJEKT RED was premiered. The video is hosted by Hollie Bennett (Head of Communication UK) and features Cyberpunk 2077’s Paweł Sasko (Lead Quest Designer), Miles Tost (Senior Level Designer), and Marcin Przybyłowicz (Music Director) talking about the game’s development, among others.

CD PROJEKT RED would like to thank everyone who voted for the game in this year’s Golden Joystick Awards — it truly is an honor!

Cyberpunk 2077 will release April 16th, 2020, for PC, Xbox One and PlayStation 4, with the version for Google Stadia set to launch the same year. For more information regarding the game, follow Facebook, Twitter, and cyberpunk.net.