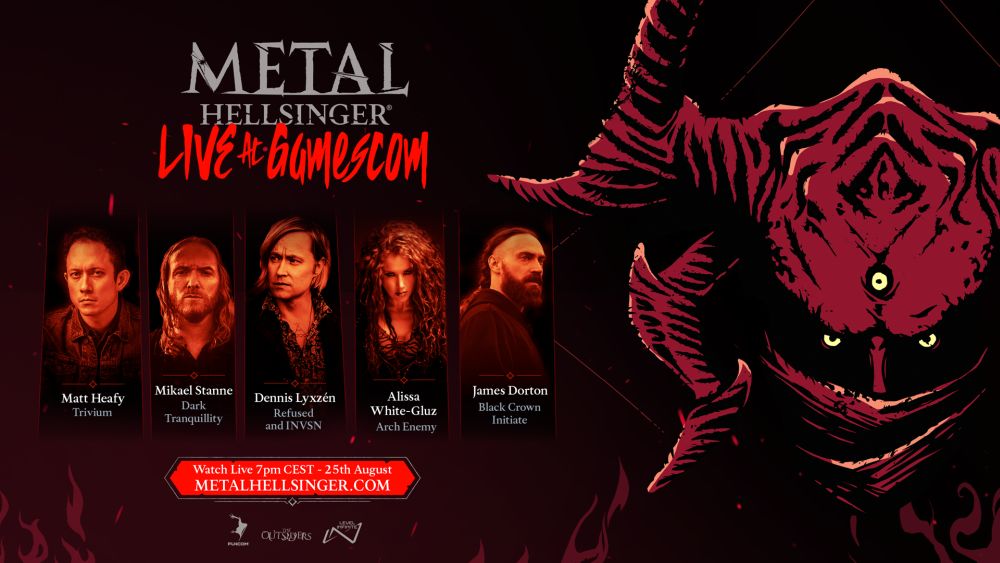 Metal: Hellsinger, the heavy metal rhythm shooter from publisher Funcom and developer The Outsiders, will take to the stage at Gamescom on 25 August, in the largest live concert ever seen at the event. Several of the game’s celebrated vocalists will perform their songs from the game, which are written by Swedish composer duo, Two Feathers. This epic joining of music and game starts at 7 p.m. CEST and will be streamed live for all to watch. Feast your eyes and ears on the trailer for this unique event now

After shooting past one million demo downloads and a rapid climb up the Steam wishlist, Funcom and The Outsiders turn it up to 11 by gathering an astounding number of the game’s metal icons to perform, including Matt Heavy (Trivium), Alissa White-Glüz (Arch Enemy), Mikael Stanne (Dark Tranquillity), Dennis Lyxzén (Refused/INVSN), and James Dorton (Black Crown Initiate).

The massive event is free and open to thousands of people, thanks to an entire hall being reserved for it. Even more will be able to witness the mayhem on the livestream, which will be detailed at a later point.

Those attending Gamescom have free access to the show, and the first 200 to enter will get a bagful of exclusive Metal: Hellsinger merch.

In Metal: Hellsinger, the better you slay to the beat, the more intense the experience gets, with the music unfolding in layers, until it culminates in full vocals blasting as you tear through demons. Dive headfirst into the fires and frost of the Hells in search of vengeance.

Metal: Hellsinger releases 15 September on Steam, PlayStation 5, and Xbox X|S. Pre-orders for consoles are available now, and the demo, which released to glowing responses, is available now on all platforms.