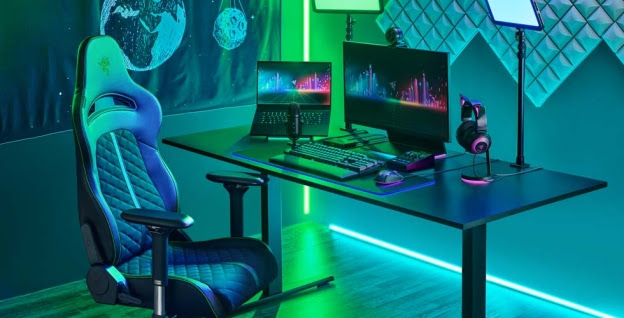 While the Audio Mixer and Key Light Chroma are aimed at desktop streamers, the wireless Seiren BT microphone is specially designed for smartphone streamers for IRL (In Real Life) mobile streaming. With its small form factor and superior audio pick-up, the Seiren BT elevates mobile streams with rich, clear voice audio, bringing a new dimension of freedom to IRL streaming.

“Until now, IRL streamers have needed to use a wired microphone to deliver clear audio to their viewers, limiting how much they can move around or change the view from their mobile, especially in noisy outdoor environments,” said Richard Hashim, Head of Razer’s Mobile & Console Division. “Now, with the Seiren BT, IRL streamers have complete freedom of movement, holding their mobile wherever they want to capture the shot, without cables getting in the way, to give their viewers a rich, engaging experience with even, balanced audio levels.”

Connecting via Bluetooth and compatible with the most popular mobile streaming apps, the wireless Seiren BT gives complete freedom of movement to the streamer, delivering rich, warm voice tones, via the omnidirectional microphone and powerful noise suppression software.

By using the Seiren BT, IRL streamers can get creative with their stream, using selfie-sticks and other mounts, without the worry of getting tangled in wires. The Seiren BT uses a simple clip-on design, letting the streamer use expansive, wide-angle shots, and frame themselves away from their mobile while maintaining clear on-stream audio.

Whether it’s strong winds or noisy crowds, the Seiren BT microphone intelligently filters out background noise from indoor or outdoor environments, with a simple high/low suppression option, via the accompanying Razer Streaming Mobile App. Supplied with indoor and outdoor windsocks, the Seiren BT is the perfect single-device solution for IRL streamers looking to elevate their content with consistent audio clarity, anywhere they choose to stream.

The new Razer Audio Mixer is a single-box solution, made for streaming, with a range of direct inputs and a centralized, powerful audio mixing software stack, bringing new levels of control and live mixing to desktop streamers. This level of control traditionally requires a complex, cumbersome and expensive multi-device set-up – but the Razer Audio Mixer brings everything into one easy-to-use, simple to set up, fully customizable 4 channel analog mixer.

The Razer Audio Mixer allows streamers to control multiple audio sources on-the-fly, balancing the volume levels between sources, muting channels as needed and even adding vocal effects to enhance their streams. This level of control is simple and easy to set-up, making it accessible to every streamer regardless of technical expertise, thanks to the direct input support for the most commonly used audio connections, including hybrid-XLR (with 48V Phantom Power), TRS Line In and Out, Optical TOS and more.

The powerful Razer Audio Mixer software is a centralized audio mixing software suite, fully integrated into Razer Synapse 3 and supports all digital audio output sources, including game sound, system, chat, and music sources. Through Razer Synapse 3, users can access a range of audio adjustment options, from software-based noise gate and EQ functions through to reverb and voice changers. Each audio source can be balanced, mixed and mapped to the hardware functions on the Audio Mixer, with the audio settings and processing offloaded to the Audio Mixers onboard processor, freeing up system resources on the PC.

The Razer Audio Mixer takes the hassle out of professional quality streaming audio, simplifying the set-up with direct inputs, giving the user full control over their audio sources, channel mixes, effects and microphone settings. By supporting both analog and digital sound sources, with source tuning, per channel mixing and live fading, muting and effects, streamers now have a one-box solution able to cope with almost any combination of hardware and software sources, making the Razer Audio Mixer the must-have device for upcoming broadcasters.

The Razer Key Light Chroma is an all-in-one solution powered by Razer Chroma RGB, bringing infinitely variable lighting to desktop streamers, allowing them to create unique, engaging, and interactive streams painted with light. Controlled through the Razer Streaming App or Razer Synapse 3, streamers can access a range of lighting presets, syncing their lighting to other Chroma RGB compatible devices, and even synching with stream notifications, for a range of effects, making their streams unique.

For more creative streams, the Key Light Chroma can display up to 16.8 million colors, bringing modifiable lighting to streaming, to set the mood and encourage audience interaction with lighting that reacts to viewer emotes, alerts, shout-outs and more. In addition to Razer Chroma RGB, the Razer Key Light Chroma pushes out up to 2800 Lumens, with a white temperature range of 3000k to 7000k, bright enough for any stream set-up, including full room lighting for VR streamers.

The Razer Key Light Chroma is supplied with a desk clamp mounted pole, topped with a ¼” screw ball joint. Mounting holes on each side of the panel allow the Key Light Chroma to be positioned both in landscape and portrait, with the ball joint allowing the panel to be angled as needed. For room flooding, the pole extends up to 1.3m from the desk surface and can be retracted to stand at 55cm above the desk for face lighting.

Powered by a 52.5W power adapter, the Razer Key Light Chroma is both Wi-Fi and Bluetooth enabled, giving the user the flexibility to control their lighting from either Razer Synapse 3 or from the Razer Streaming Mobile App.