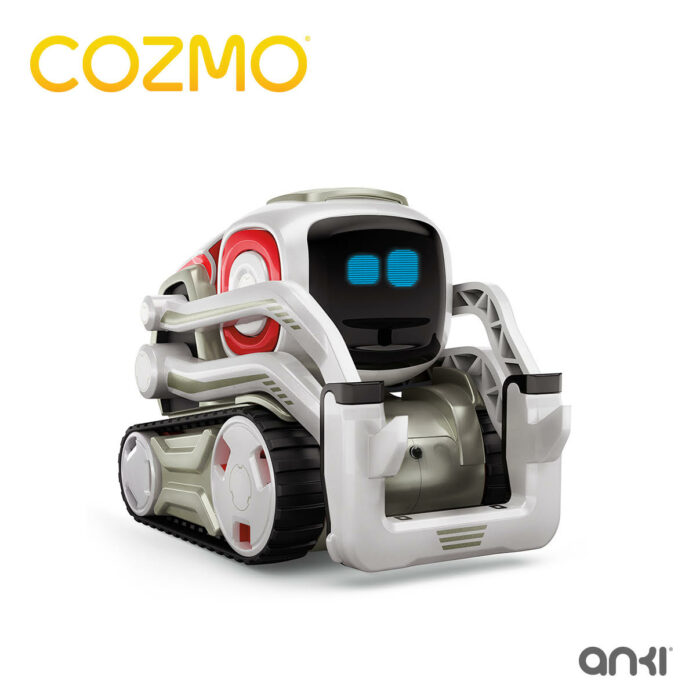 Cozmo, the critically acclaimed U.S. hit from consumer robotics and artificial intelligence (AI) experts, Anki, is available in Denmark today. Developed by a multidisciplinary team of Ph.D. roboticists, world-class animators, and renowned game developers, Cozmo is one of the most sophisticated consumer robots available today.

Charming but with a mischievous side, Cozmo is a real-life robot like you have only seen in films. A boisterous, robotic sidekick with an extraordinary level of intelligence and emotional interaction, Cozmo refuses to sit tight and wait for fun: he is ready to play. The more Cozmo gets to know his human friends the more skilled he becomes, as new abilities and upgrades are unlocked.

Boris Sofman, CEO and co-founder, Anki: “We’re bringing together robotics, artificial intelligence, game design, and film-like features to create a robot that people can form a physical and emotional bond with, just like a pet. Cozmo not only represents a significant engineering milestone, but is also a physical manifestation of the types of robots we’ve come to love in our favourite films.”

“At Anki, we are setting a new standard for the types of emotional experiences people can expect from consumer robotics products. We’re excited to see people in Denmark welcome Cozmo into their homes so they can see for themselves what’s possible in consumer robotics today.” added Sofman.

Life with Cozmo
The free-to-download Cozmo app, which runs on compatible iOS, Android and Kindle Fire devices, comes packed with interactive content and constantly introduces new ways to play. Cozmo even brings his own toys to the game — three interactive Power Cubes that he is willing to share… when he feels like it. So, whether he is playing with his Cubes or challenging his human friend to one of his many games, he is always ready for action. What’s more, free software updates provide new abilities to keep the relationship between Cozmo and his human friend fresh all year round.

Hundreds of Emotions. A Few Tricks Up His Sleeves
Cozmo’s emotions are not random. His lively personality, driven by powerful AI., is brought to life with complex facial expressions, a host of emotions and his own emotive language. His vision system and sophisticated facial recognition software allow him to constantly scan his environment and recognise people. His eyes even light up when he sees a familiar face. Cozmo also comes with his own dynamic soundtrack that matches his mood and corresponds with the in-app games and activities, elevating playtime to a uniquely cinematic experience.

Coding Bought to Life
Cozmo’s big brain and even bigger personality are operated by wildly sophisticated robotic and AI systems. Code Lab gives you unprecedented access to his core functionality. Simply drag and drop a few blocks and see Cozmo act out your creation. With Code Lab, there are no limits to what you can create.

Decidedly Durable and Simply Secure
Cozmo comes with one base charger and three interactive Power Cubes as standard. He’s drop-tested and built to last. His 300+ parts are meticulously engineered to keep him alive for a long time to come. Cozmo is also as safe as he is strong. A local device-to-device connection means there’s no data stored in the cloud for others to access.

Customise your Cozmo
Cozmo’s colourful treads (DKK 154,99) come in a range of colours that can be changed to suit his many moods. See how he looks in Osmosis Blue, Luminous Lime, New Dawn Yellow and Crimson Flame. Or get crazy and try a combination. Cozmo’s carrying case (DKK 299,99) keeps Cozmo and all his accessories safe on your next adventure. Durable and cozy, it’s custom molded compartments hold 3 Power Cubes, 1 Charger, and 1 Cozmo robot. A sealed pocket stores other items you might need while on the go. Cozmo Collector’s Edition – the same robot, but in a sleek new Liquid Metal finish  Cozmo and Cozmo Collector’s Edition are available for DKK 1.949,99