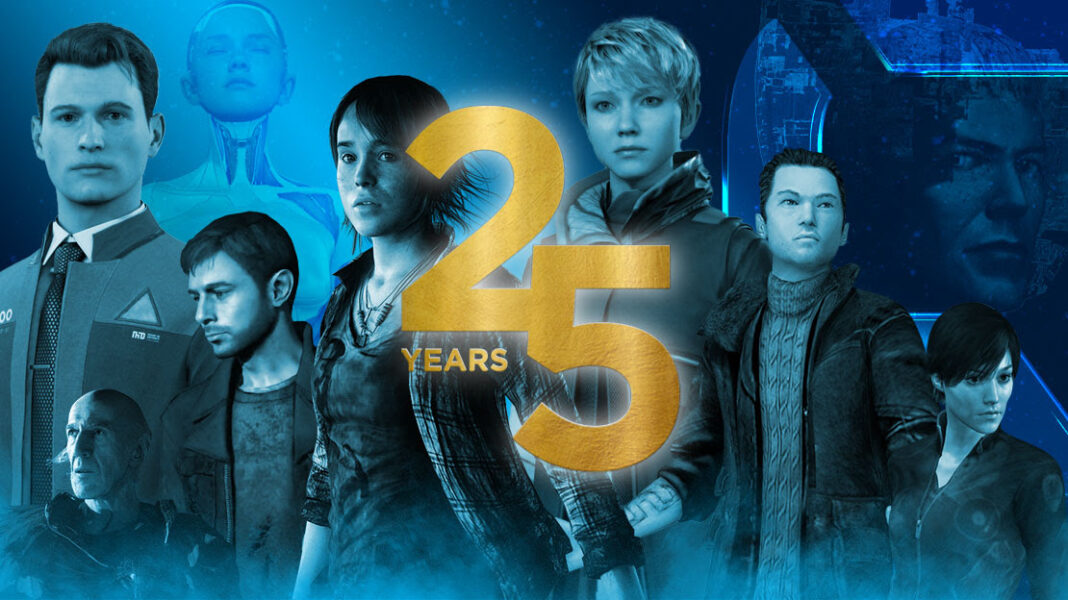 25 years old. A quarter of a century. I would never have dared to imagine, when I moved the offices and computers into a rented van on May 1st, 1997, that this studio, created with a few friends and officially born the next day, would still be here 25 years later.

What was I thinking 25 years ago when I founded Quantic Dream? I had imagined this game that I dreamed of playing, an action-adventure game set in a futuristic parallel universe, in a city called Omikron. I presented it to all the studios on the planet in the hope of developing it with their teams, but none of them accepted…

So as no one wanted it and I couldn’t imagine not making it, I decided with some friends to create a studio and find a publisher to finance the development.

Omikron: The Nomad Soul was to be a miracle for me, inspired by Mark Twain’s famous phrase: “They didn’t know it was impossible, so they did it“. As a totally inexperienced studio, we were going to make one of the very first real-time 3D cities in history, one of the first video games to be entirely in motion capture, and one of the first games to feature more than thirty mixed and multi-ethnic playable characters. And we were going to create an artistic collaboration the likes of which we’d never dreamed, with David Bowie becoming an avatar in one of the first – the first, even? – in history.

All this was only possible thanks to those who had put their trust in this project when it was only an idea: Fabien, Sophie, Philippe, Olivier, Anne, Pierre, Florian, Antoine, Xavier… 25 years later, I think about it with emotion, to send them my most sincere thanks.

I also think about the magazines that took an early interest in Quantic Dream: Generation 4 in France and Edge in England, our bible at the time. Both were the first to talk about our project when it was still in its infancy, which allowed us to find a publisher. Quantic Dream would not have existed without the passion of these journalists, their enthusiasm, their sincere love of video games and developers.

When I look back on the road we have travelled, I realise how lucky I have been to be able to collaborate with talented and passionate people, first and foremost my team, who deserve all the credit for our journey, who, through their involvement, their attachment to the studio and their commitment, have made the impossible possible. I am also thinking of all the magnificent encounters and collaborations with those who were willing to bring their immense talent to our projects.

But the most extraordinary encounters have been with the fans whose paths I’ve crossed over the past 25 years: their testimonies, their passion, their support, are the reason Quantic Dream exists. Nothing makes us happier than to talk to them, to hear their stories, to discover how the game has echoed an event in their lives, sometimes in a particularly moving way.

I remember, for example, the person whose spouse was dying of cancer and who found comfort in Beyond: Two Souls, the game that evokes the possibility of an afterlife. I think of the young woman who, faced with the violence of her partner, and who, by playing the scene where Kara runs away with Alice in the face of Todd’s violence in Detroit: Become Human, will find the courage to take her little boy and run away too. I think of the young woman who lived on the streets for years and tearfully played the scene where Jodie is homeless in Beyond: Two Souls… So many players, so many personal stories, so many emotions, so many ways our games have echoed in their lives. Each of these stories moved us deeply.

Through our games, we have always been keen to tackle themes that touch us, such as parenthood, love, sacrifice, redemption, justice, equality, the right to be different, because we have always believed deeply that a video game was legitimate to tackle sensitive subjects, even when they are serious and important.

Quantic Dream has always wanted to go beyond conventions to explore other avenues and question what a video game is. We have always assumed our choices and our atypical positioning, to move the lines and express ourselves without compromise. We have thus been able to work on games for which we have had a sincere passion, while defending our deepest convictions, and we measure the immense luck we have had to be able to do so.

With the success of Detroit: Become Human and its 7 million copies sold, Quantic Dream is now an independent publisher that finances and markets its productions and supports other independent studios. We have gone multi-project, significantly increased our staff, including the opening of a second studio in Montreal, and most recently announced Star Wars Eclipse™, the most ambitious game in our history and a dream come true.

As an organization, we continuously work on improving, to reinforce our commitment to be a more diverse and inclusive company, and to make sure that our games faithfully represent all communities. This is a commitment we always had and that we will continue to reinforce in our culture and in all our future games (read more about those efforts here).

From David Bowie to Star Wars™, these 25 years have been an exceptional journey for each one of us at Quantic Dream. This journey is that of an entire team, which believes in its vision, and which has built a unique culture and know-how through its involvement and commitment. Today, Quantic Dream is turning a new page in its history, which we are approaching together with enthusiasm and humility, aware of how far we have come, but also of how far we still must go to pursue our dreams and share them with millions of people around the world.